Who’d have thought that a company making Jelly Beans would dream up the idea of using, of all things, the England Cricket team, to spearhead a new Marketing campaign.

And, although Kevin Peterson took umbrage on the field at having been accused by the Indian batsman, it would seem that Alistair Cook may well be the Secret Jelly Bean thrower, although he claims today to be “more of a fruit pastille man”. Cook, until now, looked, for all the world, to be the model of propriety in the England test team. 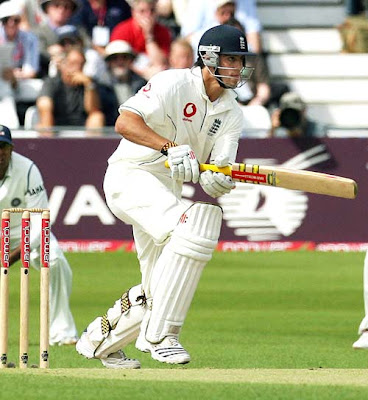 ALISTAIR COOK BATTING FOR ENGLAND
You look at his 22 year old, “Butter wouldn’t melt in the mouth” features, and you can’t imagine him getting on the sledging bandwagon, but the simple answer these days is that they’re all at it. Sometimes it’s picked up by the wicket microphone, and depressingly too infrequently there’s actually bit of wit about what’s heard.

My favourite snippet was one involving the rather “porky” Sri Lankan batsman Arjuna Ranatunga as the victim. Shane Warne (who else?), trying to tempt the batsman out of his crease mused what it took to get the plump character to get out of his crease and drive. Wicketkeeper Ian Healy piped up, “Put a Mars Bar on a good length. That should do it.”

Anyway, back to Mr Cook, and his ability to behave as if he still hadn’t completed the growing-up process. Eagle-eyed readers will perhaps understand the reasons more when they recollect that he went to the same school as myself – Bedford.

Now, one of the compulsory subjects there, in my day, was Applied Childishness. There was not then (at least, I don’t think) an ‘O’ level in it, although I guess it may well now be on some Examining Board’s offerings, but in the 60s, it seemed to be a significant part of the growing up process at Bedford.

Some examples - My brother-in-law, who also was educated there, recalls doing a most effective Chemistry Practical, by proving that the School Swimming Pool would indeed turn a very satisfying shade of pink (actually PINK!), when a cupful of Potassium Permanganate was added to the water.

His other exploit, on the very last day of his school life, was at the Final Assembly of the term, which was then held at the unbelievable time of 7.00am in the morning to allow Boarders the maximum time to get home. Rather than enjoying for the last time the stentorian tones of the School Grand Piano accompanying the rendition of the School Song, it was decided (note use of Passive Tense here to avoid long term incriminations) to put a bunch of bamboo canes into the piano. The change from poignant classical chords, to Chas and Dave, did not apparently go down too well with those in charge.

Brother-in-Law was offered the option, with about a minute of his school life remaining, of being expelled, of having Six of the Best (Corporal Punishment then being encouraged as part of School life’s rich pageant). He chose not to be expelled.

My own contribution was much less flashy, but potentially a good deal more dangerous. My Sixth form education was in the Sciences, in the middle of the time when the Americans were getting ready to send men to the Moon. We forget now just how exciting that was. I was fascinated and caught up in the whole thing, and read avidly everything written about it. One thing which caught my eye was the fact that the fuels used by the American Titan rockets were Red Fuming Nitric Acid and (even after 40 years, I’m word perfect here) Unsymmetrical Di-Methyl Hydrazine). These two rather noxious substances are what is known as Hypergolic, that is they ignite on impact. The simple schoolboy view was that all you had to get the two substances in contact, and QED, you went to the Moon. How prophetic that thought nearly was!

So, as the year’s Organic Chemistry course wound its way forward, one day we ended up studying Hydrazine and its associated compounds. It didn’t take much thought to wonder using a tad of lateral thinking that, with the Di-methyl Hydrazine we had just made, and the Red Fuming Nitric Acid, which was sitting there unused in the Science lab Fume Cupboard, there might be an interesting practical experiment to be undertaken here. Now the Di-methyl Hydrazine I had made was apparently symmetrical, but I concluded that the symmetry issue was probably the icing on the cake, so what the hell.

I poured a small thimbleful of each out into separate containers in the fume cupboard, and with the mechanical arms used to pour corrosive liquids into containers, gingerly poured a small amount of one into the other. Thank God I was behind the wooden stanchion at the corner of the Fume Cupboard, because I think we (actually I) demonstrated just how powerful this fuel was. With a very smart explosion, it neatly blew the Fume Cupboard out and the panes of glass all over the Laboratory - thankfully no-one was hit by the flying pieces, but one’s blood runs a bit cold thinking about it even today.

The strange thing was that no-one seemed to make a song and dance about it. I was told off, and it was suggested that perhaps I shouldn’t do anything like it again, but that was it. Can you imagine the Health and Safety Investigation that would be set in train today?

However, as a sure-fire way of remembering what these substances were, well, it has all stuck in my memory without sign of brain fade, ever since.

Talk about a picture speaking a thousand words. I think it’s a better way of education than the H&S restricted book experiments undertaken today, but then, I’m only a Grumpy, Rose coloured spectacled, Old Git.

Comments on the last clause in the last sentence are NOT welcome.