WHO BREAKS A BUTTERFLY ON A PEANUT BUTTER, JELLO AND BANANA SANDWICH?

It will be 30 years ago, in a few days, when Elvis Presley died. You almost now have to be middle aged to remember just how big an impact he made, not only on Pop music, but actually on the whole cultural relationship between the young and old of the Western World.

Before he hit the news, we all pranced around to songs like “The Ballad of Davy Crockett”, “Mr Sandman” and “How much is that Doggy in the Window?”. Then came along this guy singing things like “All Shook Up”, “Hound Dog” and “Heartbreak Hotel”. 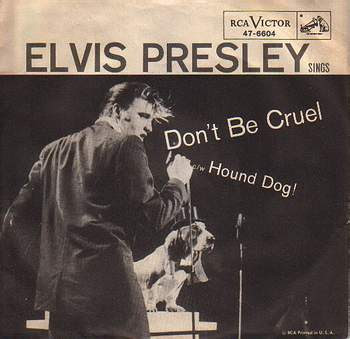 However you look at it, the man and those that followed him, brought about a whole new shape to society. Pop music and the focus on youth today, in its various forms, is all-pervasive, and you only have to look back at others who were in the absolute forefront of this change and hear them all say that “If it wasn’t for Presley, we wouldn’t be here”, to realise just how powerful his influence was.

Can you really think of a trio of songs from one person, which have a greater claim to be the Most Important Pop Songs ever? The last Channel 4 “Top 100 Pop Songs of all Time” came up with John Lennon’s “Imagine” as its Number 1. How could anyone put this mournful, drab little dirge in the same league as “Heartbreak Hotel”. You just have to listen to Presley’s first verse, with that terrific voice, and that fantastic beat and atmosphere to know you’re in the presence of something really special. Now try and imagine hearing it in 1958, when this country had only just finished with Ration Books, and no-one owned a pink Shirt, apart from a few slightly weird characters in Chelsea. You cannot believe the impact he had.

He had more Number Ones that anyone else (including the Beatles), in spite of his career taking a rather tortuous course for a good number of years, including slightly cringe making “U” Certificate “feel-good” films. He had several come-backs, some working brilliantly, others not.

A couple of days ago, the “Times”, in anticipation of the anniversary, published a few articles about him, and rather bravely I thought, reprinted the Leader they wrote on the day of his death. It was then a newspaper where Hipness and Coolness were alien concepts, and the leader referred to The King, firstly in quotation marks making you feel they had donned rubber gloves for the occasion, and secondly with the following summary – “an indifferent singer and musician, performing for the most part mediocre songs, a poor actor and, it seems, a totally uninteresting person”. They did redeem themselves a little by saying he “was not strictly the first to sing it (ie Rock’n’Roll), nor was he the best, but his influence was unquestionably pre-eminent”.

Tim Rice wrote a suitably fulminating letter wondering just how out of touch they were, and the other Letters of the Day backed him up 100%. The beautifully English one which ends the “Letters to The Editor” tirade got it beautifully right.

From a Betty Hurstfield of Hampstead –

Sir, In 1956, the year when Elvis Presley’s extraordinary talent burst on the world, I started to teach in a large mixed comprehensive school in north-west London. I shall never forget the elderly senior mistress coming into the staffroom one morning and saying sternly “I must speak to a boy called Elvis Presley because he has carved his name on every desk in the school”.

This leader is in pretty complete contrast to another one written in the same Newspaper, which talked about the Rolling Stones, or more particularly Mick Jagger and Keith Richards. Following an extremely well publicised “Drug Bust” at Keith Richard’s house Redlands, there was a showcase trial which included some fascinatingly lurid police evidence, involving Marianne Faithfull, a fur rug (and not much else in the clothing line) and several other men. The police evidence was damningly boring – “Sitting on her right was a person I now know to be male but at the time I had thought was a woman. He had long fairish hair and was dressed in what would best be described as a pair of red and green silk 'pyjamas'. I searched him and this was all he was wearing. I formed the opinion he too was wearing make-up. All the time I was in the house there was a strong, sweet, unusual smell in all rooms.” It went on – “It was not the smell of burning wood."

The Judge, an ex-Naval commander named Leslie Block sentenced Keith Richard to 12 month’s imprisonment, with Jagger’s sentence being 3 months. After a night in the cells, the Appeal Court let them out on bail. There was a public outcry, with candle-lit vigils and oddly, William Rees-Mogg, then Editor of the Times, wrote an impassioned Leader on the issue entitled “Who breaks a Butterfly on a Wheel?”.

This piece is renowned as being hugely influential in the Appeal Court quashing the prison sentences and replacing them with conditional discharges. One of the closing sentences from Rees-Mogg’s piece reads – "If we are going to make any case a symbol of the conflict between the sound traditional values of Britain and the new hedonism, then we must be sure that the sound traditional values include those of tolerance and equity. It should be the particular quality of British justice to ensure that Mr. Jagger is treated exactly the same as anyone else, no better and no worse. There must remain a suspicion in this case that Mr. Jagger received a more severe sentence than would have been thought proper for any purely anonymous young man."

This case is seen as a point of real change in British public opinion on popular culture, rather like the “Lady Chatterley” trial earlier in the decade.

So, in two “Times” Broadsheet leaders we see firstly a progressive view which significantly influenced the ways of popular life, and secondly a mystifyingly odd view from the musty tables of Upper Class-land. The interesting thing about them is that the Rees-Mogg article was written almost ten years to the day before the “Times” summary of Elvis Presley’s death on the world.