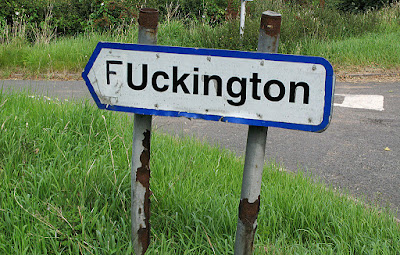 If you look back to "WELL ANYWAY, IT AMUSED ME No.10", back on 21st April, you will see a little roadsign, just asking to be changed.
A bit like the opening batsman, who awaits the inevitability of the Bouncer, but doesn't quite know when it's coming, I've watched the sign everytime I pass it.
Yesterday, the "Bouncer" arrived, not painted on, but created "off-line", on a piece of card, and duly stuck onto the sign. Rather professional actually. It may be that the Highways Authority, or the local Council have their eye semi-permanently on the same sign, expecting the same change as I did, but they (or at least some tidy minded citizen) have removed it one day later.
Let's hope this is a demonstration of their new found response time, and they are now going to attack the potholes around the county with similar zeal.
My breath is not being held!