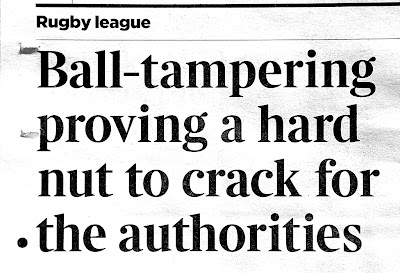 HEADLINE IN TODAY'S TIMES - SPORTS SECTION
I’m sure all the vigilant Sub-editors are on holiday at the moment, because “The Times” today has published a couple of items where the only conclusion you can draw is that Kenneth Horne is alive and well and living in Wapping, or wherever “The Times” is published these days.

I don’t think it needs any comment from me, except to say that the picture, taken by Brian Thomas, is an exquisite example of The Decisive Moment – pressing the shutter exactly at the right time. Easy to say, usually extremely difficult to do. 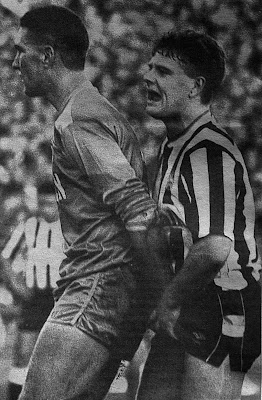 VINNIE JONES INTRODUCES HIMSELF TO PAUL GASCOIGNE IN 1987
Picture by Brian Thomas
Not only do we have a whole article on “Ball tampering”, we have a super sporting image, and even a rather tongue in cheek, or is it ball in hand, medical evaluation of the potential effects of this manly cuddle, by the omnipresent Dr Stuttaford. 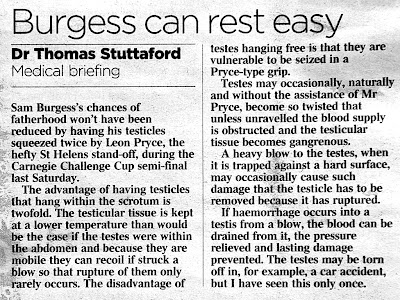 The article seems to set out to get as many “double-entendres” into the piece as it can, following a three match ban on Rugby League star, Leon Pryce, for grabbing the attention of a Bradford player, Sam Burgess. Apparently Pryce made “two tackles on his tackle”, using what the Australians apparently call the “squirrel grip” - grabbing a handful of nuts!

This is seemingly not an infrequent occurrence in Rugby, particularly in Neath, where, following one incident, the Australian coach referred to the place as “the bag-snatching capital of Wales”.

It also seems to go on in Cricket, American Football, Soccer, where one guy in Spain, celebrating a goal rather exuberantly, bit another team member on the penis, Wrestling (including Sumo), and most worryingly Bullfighting, where it would seem the bulls horns sometimes get into the act.

I must have led a very sheltered life.
Tags:sport,
ball tampering,
vinnie jones,paul gascoigne
Posted by rogerc at 11:00 pm