The ASBO scheme (Anti Social Behaviour Order) has been a jewel in the armoury of our present Government’s approach to controlling the less seemly side of this country’s inhabitants since the scheme’s introduction in 1999.

Most of the nearly 10,000 ASBO’s issued to date seem to have been given to individuals in the large urban conurbations, but they now seem to be spreading – see the picture below which was taken in central Shrewsbury a couple of days ago in a Town Centre shop window. 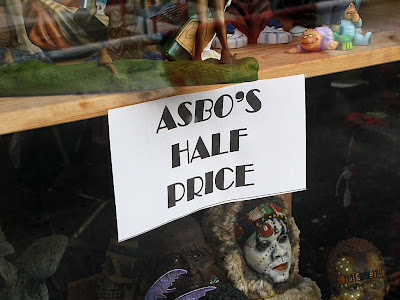 Perhaps not quite what the Government had in mind.

Also, along similar lines, I came across this extract from the “Bucks Herald” a couple of days ago -

A PENSIONER from Aylesbury has pleaded not guilty to two counts of breaking an anti-social behaviour order which prohibits him from interfering with cyclists in the Vale.
A*** P*****, 74, of Eleanor Gardens, Aylesbury, appeared before Aylesbury Magistrates Court this morning (Thursday March 13). It is alleged that on February 10 he caused a cyclist to stop on a footpath by moving into his way and raising his hands, and that on February 29 he stood in the path of a female cyclist causing her to swerve and that he waved his arms.
He had been prohibited from stopping, by verbal abuse or physical actions, any cyclist on any public footpath or in any public place within the jurisdiction of Aylesbury Vale District Council until December 3 2009.
P******, who has refused to be legally represented, will be tried on June 6 at Aylesbury Magistrates' Court.

A pre-trial review will be held on May 12. He was granted unconditional bail.
His ASBO remains in place.

Interestingly, the use of the inappropriate possessive apostrophe points to another of this government's great failings - basic literacy!