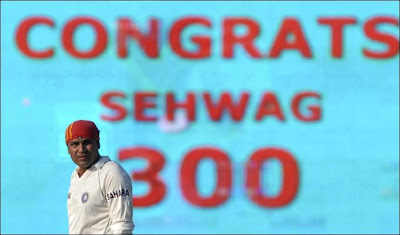 SEHWAG, CAUGHT BRILLIANTLY BY A "SUN" PHOTOGRAPHER
Regular readers of this tiny corner of the Internet will by now, have picked up on my love of cricket. Having just watched England, over the last few weeks, dutifully beating a depleted New Zealand team, the interest has now switched to a “Top of the Table” Test Series in India, where the home side takes on South Africa.

If you assume that Australia are still the best side in the world (and I’m actually not quite sure about that), then you’d probably say that this series is between the second and third best sides in the World at present, playing to become heir apparent. So there’s a lot to play for.

Day Three of the First Test has just finished, and I’ve just watched the most blistering innings I can ever recall. Over the first two days, South Africa fought their way rather effectively to a tremendous score of 540. Alright, it was on a batting paradise of a wicket, but it still left India a massive psychological task to knuckle down and match such a huge score. If it had been England under the cosh, you would have worried every ball about a batting collapse, to be followed, as night follows day, by a humiliating Follow On.

Not India - they’ve just finished the day at 468 for 1 wicket, with Virender Sehwag unbeaten on 309. Triple centuries are very rare beasts, and on a day when temperatures were stratospheric and the humidity was a bit like a sauna, Sehwag blasted his way to his 300 score in 278 balls. This is the fewest ever in Test cricket, beating Wally Hammond’s record which has stood for 75 years by an unbelievable 77 balls. If you don't accept Hammond's record, where the number of balls was estimated, then the next best is Matthew Hayden, at 360 balls. Just do the maths, and marvel! 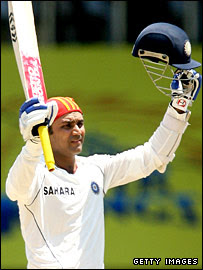 TAKING THE PLAUDITS - HE PLAYED FLAWLESSLY

To my simple mind, when this guy is “on song”, he is the most exciting batsman on Earth, only Sri Lanka’s Sangakkara being remotely comparable. He hits the ball all over the ground with an arrogant ferocity which must put the fear of God into any opposition captain. You could see the despair in the bowlers – there was nowhere on the pitch they could bowl that was safe from him. So far in this innings, he's hit 41 Fours and 5 Sixes. As a comparison Alistair Cook, England's opener, hit his first Test Cricket Six ever (out of nearly 3000 runs) in New Zealand the other day - and that hit was a fluke top edge over the Wicket keeper!

And this all came from a man who is not sure of his place in the team! A very revealing comment from him after the day’s play shows just how much difference there is in the mindsets of Sehwag and several of the current England batsmen. When asked how he managed to concentrate (he was batting all day and some of yesterday, with almost no errors made) – “It hurt when I was not in the team so I had to prove myself and I want to get back my seat so that's why I can concentrate and it's good for me and I think I'll continue in the next two Tests." I bet that makes South Africa really happy.

Goodness knows what awaits us tomorrow, as India need to carry on, still trailing by 72 runs. If things go well for them, you could easily see them carrying on for most of another day, with the mouth-watering thought of Sehwag playing the highest Test scoring innings ever. He only needs to score another 92 runs – about 10 overs at the rate he can score, if he gets going! And if you want to look at another record, India were the team on the end of a farcical score of 952 for 6 (it’s the 6 wickets that that makes the knife really twist), made by Sri Lanka 11 years ago, so they might even think of getting that record erased if they think a draw is likely!

From South Africa’s viewpoint, you could feel their demoralisation when they saw what they thought was their dominating total of 540 being taken brutally apart by some of the most inspired, and inspiring hitting you will ever see.

It was an absolute joy to watch. Thank goodness for my Sky+ box. It’s just gone Midnight, and I’m going to sit through it again.

We need to get the England team to watch it all. Actually perhaps not. This would blow their confidence wide apart, and with India visiting these shores in a couple of months for a Test Series against Mr Vaughan and his Merry Men, I think we’re going to need all the help we can get.