One year and 9 days ago I wrote a piece on a Cookery Book, of all things. Written by the snappily named William Menzies Weekes Fowler (or Willie to his friends), and called “Countryman's Cooking”, it is an absolute humdinger of a book. 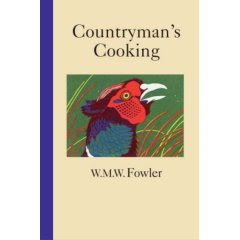 THE NEW COVER FOR THE BOOK
Published in 1965, it immediately bombed, but was re-discovered by one David Burnett, a “one-man band” publisher from Ludlow, who re-published it in 2007. It is gloriously un-politically correct, hugely self opinionated, brilliantly sexist, hilarious, and also an extremely good cook book. 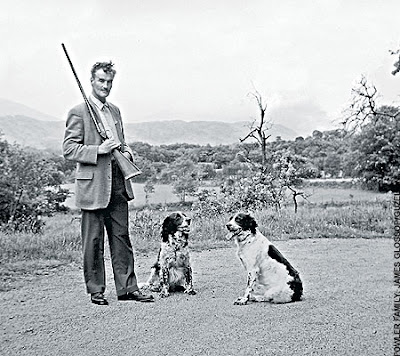 WILLIE FOWLER, IN TYPICAL POSE
My Brother in Law, who, in Golfing terms, plays off about Scratch for his Cooking Handicap, has cooked me a couple of his recipes, and they are terrific – try his Beef Olives, and throw Delia to the dogs.

If you can find your way back to 22 March 2007 in this blog, you can read what I said then. The reason for bringing it back to centre stage today is that the BBC, bless them, have recorded edited excerpts from the book, and are broadcasting them at 3.30pm each afternoon (Monday-Friday) this week on Radio 4.

I don’t know who selected the reader, but if they’d sat for 100 years trying to improve on their choice, they’d have failed.

Leslie Philips, louche, debonair, caddish, need I say more, works his way through Fowler’s witty tome – spot on. A few minutes of pure joy each afternoon. If you can’t get to a Wireless Set, then chase it down on the “Listen Again” feature on the BBC Radio 4 Website.

You will not be disappointed.
Tags:
wmw fowler,fowler,willie fowler,countrymans cooking
Posted by rogerc at 8:17 pm

Thanks for the information about the programme. I listened. Excellent production. How can we persuade the BBC to publish the series on a CD? My father - near blind and without a PC with broadband would love a copy.

Until the BBC gets around to publishing the series on CD you might be interested in the Ask & Record toolbar. It is a Firefox add-on that allows you to record anything directly from the internet. (As you know Mozilla Firefox is a browser.)
Ask & Record is free and it works. It sends the recording to a folder on your own computer. You could then put the recording on a CD for your Dad.