I don’t know the Arabic equivalent of “Schadenfreude”, but after seeing this, they sure need one. You need to know that no-one was apparently seriously hurt, so - Read this, look at the pictures, and come to your own conclusions. 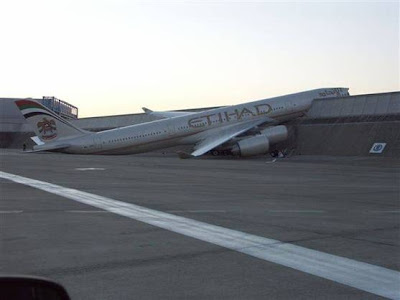 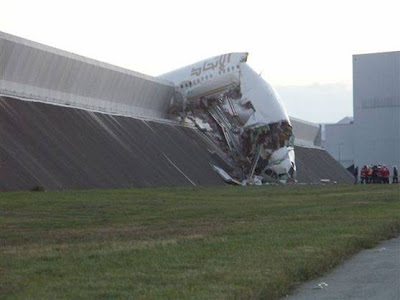 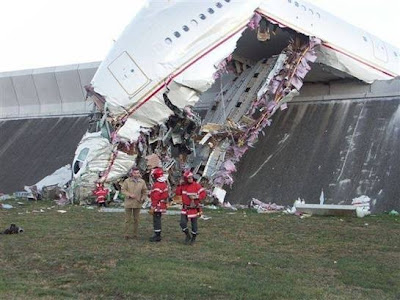 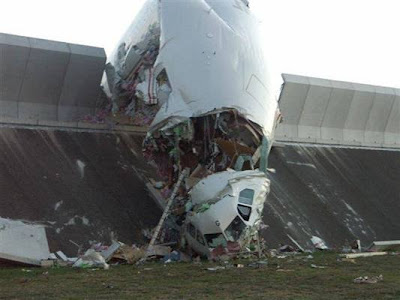 A friend sent it to me, almost disbelievingly. Apparently, it happened last November, but I hadn’t seen it before now, and it rather took by breath away. A couple of other friends “in the know” broadly confirmed what had happened and added a couple of other comments about it.

The report below (in blue) has come from one of the library things that report Industry goings on. You may wonder why it hasn’t all been splashed around the newspapers, but I suspect that neither the makers, nor the airline, and especially not the aircrew, can see any PR Brownie Points at all in showing it to the rest of the world. There are a couple of anodyne Press releases on Airbus’s Website, but you wouldn’t imagine from them the scale of what happened.

The brand spanking new Airbus A340-600, the largest passenger airplane ever built (Author’s note – it’s not!), sat in its hangar in Toulouse, France without a single hour of airtime.
Enter the Arab flight crew of Abu Dhabi Aircraft Technologies (ADAT) to conduct pre-delivery tests on the ground, such as engine runups, prior to delivery to Etihad Airways in Abu Dhabi. The ADAT crew taxied the A340-600 to the run-up area. Then they took all four engines to takeoff power with a virtually empty aircraft. Not having read the run-up manuals, they had no clue just how light an empty A340-600 really is.
The takeoff warning horn was blaring away in the cockpit because they had all 4 engines at full power. The aircraft computers thought they were trying to takeoff but it had not been configured properly (flaps/slats etc). Then one of the ADAT crew decided to pull the circuit breaker on the Ground Proximity Sensor to silence the alarm.
This fools the aircraft into thinking it is in the air.
The computers automatically released all the brakes and set the aircraft rocketing forward. The ADAT crew had no idea that this is a safety feature so that pilots can't land with the brakes on.
Not one member of the seven-man Arab crew was smart enough to throttle back the engines from their max power setting, so the $200 million brand-new aircraft crashed into a blast barrier, totalling it.

Just when you think it couldn’t get worse, a friend reports that “The test crew came out the emergency exits in the cockpit without turning the power off. (Actually, looking at the photos, I’m not sure they’d have been able to find the switches!) At least one engine kept going for hours and no one was brave enough to go back inside. They contacted Rolls Royce and there were suggestions that water should be pumped in the engine and even quick setting cement (!) but in the end they left it well alone to run out of fuel.”

Can you imagine it a few minutes later –

Scene: The Pilot’s Manager’s Office
Pilot: “Excuse me Boss….”
Boss: “Yes.”
Pilot: “Have you got a couple of minutes, there’s something I think you ought to know.”
Boss: “OK, fire away.”

There is a pause.

Pilot: “I think you should sit down first.”

Can you begin to imagine how much care was going to go into the writing of the Insurance Claim?
Tags:
etihad,a340,aviation
Posted by rogerc at 12:03 am

Email ThisBlogThis!Share to TwitterShare to FacebookShare to Pinterest
Labels: a340, aviation, etihad

These photos made the rounds in the industry shortly after the accident. $140 million, off to the junkyard.

You really make a point of mentioning that the crew are Arabs. Is this post about a warning alarm that may need to be corrected or is it a sinister racist post against Arab people?