Many posts ago, I wrote a piece about car safety. In Europe and the USA, there are “independent” organisations (NCAP, in the case of Europe) which test most new cars using a standard test procedure. They then issue the results in the form of a points and a star (up to 5 – this being the best) rating. In these safety-philic times, every manufacturer puts a lot of effort into achieving the maximum Star rating. The marketeers each company employs to push the company’s image down our throats would not have it any other way.

Some companies, notably Renault in Europe, base a large part of their corporate market placement and positioning on making the company appear to the punters to be the “safest” in the marketplace. They don’t say it quite as baldly as that, but they’ve clearly decided that the safety moral high ground is where they want to be, or at least be seen to be.

But it’s not as simple as that. In Europe, when each of the new cars which major manufacturers produce are launched, they submit one to NCAP who put it through its safety paces, and then issues its safety rating. But all cars are not the same. NCAP categorise them into 9 classes ranging from the Supermini (ie little ones) to Large Off-Road 4x4s (those big buggers we all love to hate). And here’s the problem. Someone decided that rather than compare car safety absolutely ie all cars being considered against all the others, they would measure cars only within their own class. So you get a 5* Supermini and you also get a 5* Large Off-Road 4x4. You’d think 5* would be the same everywhere but, just like Animal Farm, some cars are more equal than others.

Two things happened to me this week, which set me off thinking about all this.

Firstly, I got into discussion with a colleague who maintained vehemently that his “5 Star” Supermini was just as safe as the “5 Star” 4x4 which I’d just parked outside the factory – simply because they both had 5 Stars.

Secondly, and a day later, I came across a picture in a Car magazine (Autocar) which showed a picture of a semi controlled crash between an Audi Q7 (the big one) and a Fiat 500 (the supermini). It had been organised by ADAC, a German Motoring organisation, and if you ever want a demonstration that “a picture speaks a thousand words” this is it. Both cars are granted 5 Stars by NCAP, but, well, which car would you rather have been in? 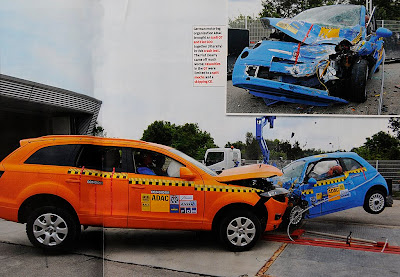 I don’t know if it was Autocar’s rather childish sense of humour, or a simple report of what actually happened, but their caption said that the damage to the Q7 was limited to “a spilt mocha and a skipping CD”. The remains of the little 500 shows the passenger test dummy seeming to be making an unplanned and rather inelegant exit through the car’s side window.

The point here is simple. Basic Physics says that if a big thing hits a small thing, the big thing comes off best. But the way the safety people present their data to the world leads quite intelligent people up the wrong path, and by the time they find out they’re wrong, they could be in a hospital, or even worse.

Government clearly have conflicting issues here. They want to be seen as “Safety conscious”, so, very laudably, they want to load our cars with airbags, progressive crumple zones and other gubbins and gizmos which makes the cars heavier and heavier, and safer. Today’s Mark 5 VW Golf, for instance, weighs twice as much as a Mark 1 Golf from 30 years ago. But they also want to get the country thinking their way about carbon emissions and global warming, which means the smaller the better. So they have a dilemma. Waste and global warming seems to be hitting No.1 as the largest issue facing mankind, or at least the UK Government, with the result that big cars are now becoming the work of the devil.

So, the message that a big car is much safer than a small one now gives Those In Charge a real problem. You do wonder if they are therefore setting out to suppress this unpalatable piece of information, that, though they may emit twice as much Carbon Monoxide as their smaller brethren, they are actually a lot, lot, safer. Knowing a bit about the way Governments think, it's not surprising to find that when trying to find any data showing how safe a big car is in collision with a small one, you have to spend a good deal of time looking. I found a decent, reliable report a while ago, and, in the real world, ie one where big cars hit little ones, you could see its inevitable conclusion jumping out at you.

If you want the safest car you can buy, get a big one. You are up to some 30 times (no, that’s not a misprint) less likely to be killed or seriously injured having a crash in a large 4x4 than you are in some small cars. Some people may think that’s unfair (big cars are more expensive than small ones, and they do emit more undesirables than a small one), but you can’t get away from the fact that they are a LOT safer.

If we live in a market driven economy, why should that sort of information not be made available to us when we buy our next vehicle? If money is a problem for a buyer (and whenever isn’t it?), then they might choose to buy a low mileage one year old version of a larger car rather than a new small one, if safety was top of the list of their priorities. But only if they realise that increasing size tends to lead to increasing safety. Today, they probably think they’re buying the best and the safest they can, when they go for a 5 Star Supermini, and very simply they’re not.

If you look at NCAP’s website, and do a bit of delving in it, you can actually find a couple of rather coy comments about all this. To my simple eye, since the differences between the car classes are so large, you’d have thought they’d have warranted a lot more prominence – but it’s rather well hidden away in the FAQ section. This is what NCAP says –

In frontal impacts between cars, the occupants of the heavier car or the one with higher structures tend to fare better than those travelling in lighter lower cars. As these effects are currently impossible to overcome, Euro NCAP only makes comparisons within size categories. The rating of a car within its size category is a function of the quality of its safety design.

Can results be compared between groups?

No. Results should only be compared within the same group. The frontal testing method mirrors a crash between two similar sized cars. A heavier car or one with a higher structure will tend to have an advantage if it impacts a smaller car. The Euro NCAP results cannot be used to predict the outcome of such crashes.

Does this strike you as a balanced way of telling the public that one class of car is up to 30 times safer than another? No, I don’t think so either. What you see there are the inevitable “weasel” words which get written when something has to be said, but the writers really wish they could avoid saying anything at all.

Yes, I know that if we all drove large cars, much of the difference would be eliminated. It’s like if you drive a large 4x4 into a 44 tonne lorry, you’ll likely get squished. But since most cars on the road are smaller than your 4x4, then the chances are that you’ll come off best in any random crash you may have. Only if you buy the smallest car are the dice permanently loaded against you – unless of course, if you hit a motorbike.

Is it politics, or is it someone trying to push low emissions at the expense of safety? I don’t know because no-one is saying, but I think the safety variations in the various car classes should be much more visible.

I drive a Dodge 4x4 pickup. My wife wanted a Honda, I made her get a Dodge Caravan. Sure, they're big and expensive to run, but what price my life or those of my loved ones?

Great blog! I came here one time I looked up "Jim Clark" and "Lotus Cortina". I very much enjoyed your tribute about that great driver, and I enjoyed reading this post too.

We might think of ourselves as very clever, but our universe has it's rules and as much as we can try to hide them, they're always there, and we need to remember that. Quality being equal, the bigger car will be safer than a smaller one.

I do mention quality because it's no good to have a big car if it has a poor design of its safety technology.

I found this first hand account about the collision of a sporty compact against a small/midsizeish SUV interesting. I'm in no way involved with any of the people who post, just happened to find it through another forum. I hope you find it interesting.

Thanks for you analysis. Here in Germany the reaction to your results and to those of the crash test was - based on the common feeling of envy - a discussion of banning the big cars.