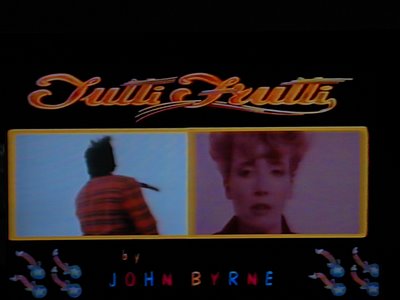 TITLE SCREEN - "TUTTI FRUTTI"
I don’t watch a lot of television, so don’t see all the series which have come and gone over the years. I tend to stumble across programmes, usually by word of mouth, which means my introduction to good programmes starts around Episode 4, when all the character introductions are well in the past. So I normally end up waiting until the release of the DVDs or, in the past, the videos to get the story from Day 1.

If I cast a bit of a personal eye over all the TV drama series I’ve seen since I can really remember, I can only come up with four to which I would unreservedly give Five Stars in my personal list of “Really Great Programmes”.

The most recent is “The West Wing”, which has just played out its final episode, and I still have it recorded to watch. When I’ve seen it, I am sure fingers will be put to keyboard to record what’s so good about it – all 7 years and 156 episodes!

The one previous to that was “This Life”, a fly on the wall style of drama centred on 6 lawyer types and their friends and work colleagues, which caught brilliantly the pace, pressure, tensions and way of life of them all. Jack Davenport and Daniella Nardini, who showed very graphically and frantically in one episode why Canon needed to strengthen the glass plattens of their Photocopiers, head a cast which has become much more well known, since it came out in 1992. Hand held camera techniques, good acting, true to life issues and a really cracking script, pushed it along at a tremendous pace. It was an truly authentic taste of early 90s angst and pressure among the upwardly mobile 25 year olds.

The last two were broadcast in the Eighties – the first being “Edge of Darkness” (1985), a top class thriller which addressed the interaction of the increasing power of global high-tech companies and governments, the police and addressing the long term issues surrounding the ethics of nuclear power and waste disposal. Great cast, great screenplay, the best music soundtrack I’ve ever heard (played very evocatively by Eric Clapton), and a really spooky atmosphere throughout the 6 episodes. 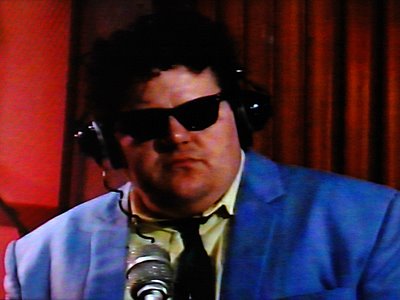 ROBBIE COLTRANE - "DANNY McGLONE"
Which leaves the last one, which was shown twice in very quick succession in 1987, and has then not been seen since on TV, Video or DVD for nearly 20 years – “Tutti Frutti”. If you want the best ever example you can find of a real Black Comedy, this is your Man. It’s a story of an ageing Scottish Rock’n’Roll band, the Majestics, who meander their way around the small towns of rural Scotland, playing what they see as their 25th Jubilee Tour. The typical Scottish pastimes are all there, as well as a couple of others like jumping in the middle of the night to your death off a suspension bridge, and self immolation via a can of petrol to get a bit of attention seeking. It sounds dreadful, but if I collect the 10 best Comedy Moments that I’ve ever seen on TV, two of them are in this series. Perhaps it’s me, and I’m just warped.

At the time in 1987, you might be forgiven for not knowing quite who the main members of the cast were, but time has changed that a bit. The lead singer of the Band was one, Robbie Coltrane, his girlfriend was Emma Thompson, and the group’s Manager was a very Victor Meldrew-like Richard Wilson.
Try getting that lot together today. 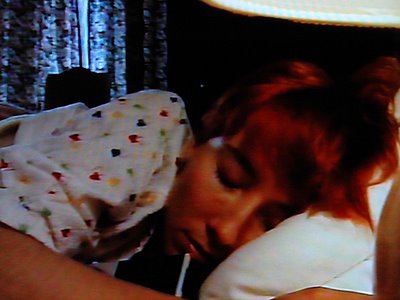 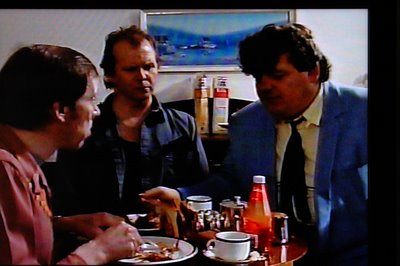 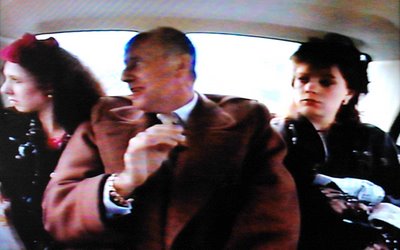 Written by John Byrne, it is excrutiatingly good in its toe curling depiction of the downward spiral, the fits and foibles, and the gradually dissolving egos of the four members of the band. Robbie Coltrane is simply brilliant as a very large, but (I’m told!) surprisingly sexy lead singer, who can actually sing. His rendition, towards the end of the series of “Love Hurts”, aimed directly but sung tangentially at Suzi Kettles, his girlfriend, played by Emma Thompson, would hit the top of the charts if someone was adventurous enough to release it – it’s very, very moving. The increasingly manic actions of Eddie Clockerty, the frantic Control Freakish Manager, and Janis, his (very) cynical young sidekick, form another super thread of the storyline through the whole piece.

I’ve written in the past to the BBC, gently imploring them to release this on a DVD, but, in true Public Servant style, they are still composing their reply. The reason this scribble appears today is that John Byrne, the author, has just finished a Musical of the series, which debuts in Aberdeen next week. Rumours, unsubstantiated at present, (but as they say, we’re on the case) are that the problems which have prevented this truly excellent series from being made available to a whole new generation who will enjoy it immensely, have been finally resolved. Hopefully, 2007 will see this masterpiece issued onto a very deserving public.

In the meantime, my precious video copy of two episodes of it is sitting in the player, and I’m just off to live a couple of magical hours with the Majestics.