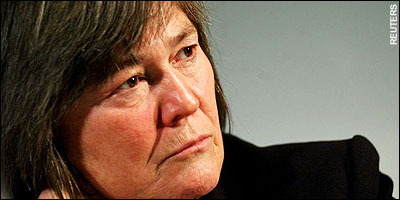 It has seemed like an accident waiting to happen watching for Clare Short to resign the Labour Party Whip. She has held the party whip for nearly 30 years, and has been a Labour MP for 23 years, after working for some time, believe it or not, as Private Secretary to Conservative Minister, Mark Carlisle.
Her robust, outspoken approach was clearly never going to sit comfortably with the “control freak” Apparatchiks in Number 10. Her inability to come to terms with the “New Labour” approach has been manifestly obvious, from the day Blair came to power.

The Labour powers that be tried to reign her in by keeping her “inside the tent” (see Lyndon B Johnson for the origin of that phrase!), sacked her from the Cabinet when that didn’t work, and I suspect then decided that she was simply a loose cannon in New Labour, and, on the outside, tried to ignore her and hope that she would go away, whilst, inside attempting continuously to neutralise her from any effect she might have on the outside world. Last week, though, she had clearly come to the end of her tether, and wrote a delightfully bitchy letter of resignation to Jacqui Smith, the Labour Chief Whip.

Dear Jacqui,
I am sorry it has come to this, but after a lifetime of service to the Labour Party and 23 years in the House of Commons I think I am entitled to discuss what has gone wrong with the government and our political system in my remaining years as an MP.
It is my view that our political system is in trouble and that the exaggerated majorities in the House of Commons have led to an abject parliament and a concentration of power in Number 10 that has produced arrogant, error prone government. …………………..
………….As you know I am critical of many other aspects of government policy.
The previous chief whip tried to use her authority to stop me discussing the fact that the prime minister engaged in a series of half-truths and deceits to get us to war in Iraq. You focus on my views on electoral reform.
The consequence is a string of rebukes, usually through the media. .............
Now come on Clare, tell us what you really mean. It’s nice for once, isn't it, to see a modicum of bile and “Sod You then” in such a letter? For goodness sake, if you don’t feel like that about it, why are you resigning?

She is one of the few Cabinet level politicians I have actually met, and I have to say, after a couple of hours having lunch with her, I came to the conclusion that she was a robustly opinionated and rather arrogant individual who seemed was not prepared even to listen to what I and several other local West Midlands industrialists had to say. Needless to say therefore, I do not wholeheartedly agree with her overall political slant. I am however very, very firmly of the opinion that the UK political scene needs more people like her. People who are not afraid to go against their own party line if their personal views do not match those of their leaders. There are so few of those around that we need to slap a Preservation Order on the ones that remain.

I mean, what sort of Parliamentary system are we operating when anyone who dares to voice a personal opi 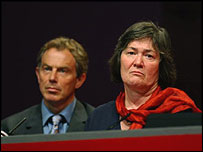 nion which differs from the Party line, as defined by the Whips Office, is vilified, accused of being a traitor, and generally disowned by her Party colleagues. It does call into question the whole ethos of the way we are governed today. Maybe I’m missing something, but the fundamental responsibility of a politician is to the people within the constituency which elected them. We seem to have slid into an era of total “presidentialism” where the sole aim of most politicians is to support “willy nilly” the dictates of the Party Leaders, and to subjugate their, and the electorate’s views, totally to those of the men at the top of their party. It is,very sadly, the only way today to climb “the greasy pole”. Sometimes you do wonder what it’s actually lubricated with.

In spite of what I thought was my own personal opinion of the good lady, if you stand back and look at the issues which she has personally raised in disagreement with her Party whilst they have been in Government, it makes very interesting reading. Look at the list which was put together in the “Times” the other day.

- Proposed discussion on decriminalisation of Cannabis
- Spoke out in 1997 about her views on the Millennium Dome – “a silly, temporary building”
- Denounced University Top-Up fees as “a really bad idea”
- Criticised Government “control freakery” about target setting.
- Threatening to resign before the Iraq war if the Government took us into the conflict without a clear UN Mandate

The really scary thing about that list is that if you asked the man and woman on top of the Clapham Omnibus (actually you can’t now, because they took them all out of service, but you know what I mean!) I’ll bet that out of the first 100 you asked, 95 would generally say that she was right, and the Government was wrong

And we are left with an administration that was more than happy to get rid of someone who thought much as most of us do. There is no doubt that by not resigning at the time war was declared, she did her personal standing considerable harm, and her “colleagues” have wasted no time at all in attempting to belittle her, her opinions and to some degree her integrity. But one thing you cannot take away from her is that she is prepared to voice her opinions, knowing that they may well not be universally agreed with. There are very few MPs today who have the guts to do that, and if she leaves parliament after this session, it will be another nail in the coffin of MPs being individuals who have their own opinions which they are prepared to voice.

There are now 4 Independent MPs in Parliament, following her decision to sit out the remainder of the Term as an Independent. The others are George Galloway, Dai Davies and Dr Richard Taylor. The three of them apparently are starting what they call a “Naughty Club” and are thinking of inviting Ms Short to join them – they are, as they say, the only party in parliament which is on the up.

The more I see of the mainstream crews in Westminster, the more I think if mavericks like these branded themselves as a “None of the Above” Party, they would get an influx of like minded individuals setting up camp with them.