DEATH OF A PRESIDENT

They showed a documentary on TV the other night called “Death of the President”, which showed a “fictional” view of George Bush being assassinated in 2007, and a view of the possible consequences. As you can predictably and boringly imagine, there were several pundits who wrote in the next day’s newspapers that such a programme should not have been shown because it would incite some form of copycat action, and that the film therefore put the President’s life at risk.

Ignoring what I suspect is a not inconsiderable number of people who might see that as a plus, do these writers not think that his life is already under threat from an indeterminate range of disaffected groups? Unfortunately these days, it goes with the job. Actually, it’s not only these days. We’ve actually had a bit of a lull recently.

So, the idea of planting such an “impossible” idea into the minds of people simply doesn’t stack up. Do you not think that umpteen organisations around the world haven’t already spent a bucketful of their own time and money planning to achieve such an eventuality? Those with a real desire, money and the capability were there ages before the film was made.

Actually, in a lighter vein, I recall one of the classic “Private Eye” covers, which after a few moments delving into www-land has just come to hand. Actually, I've just realised why the cover was produced. Look at the date on the cover - 22nd November 1968, 5 years to the day after Kennedy was shot. 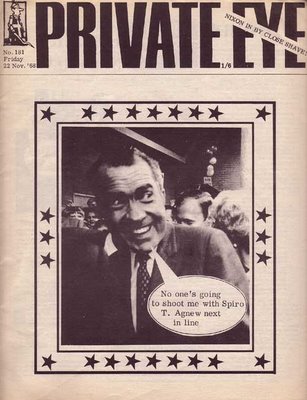 It shows Richard Nixon, with just the hint of a smile playing on his lips, explaining to the world his strategy for ensuring that he completes his own presidency still alive.

His answer is simple – pick an idiot for Vice President.
Enter Spiro T Agnew.
I have to say, even at the time, when we had got over the initial shock of Kennedy’s death, this cartoon struck a very black, but unfortunately accurate and worryingly to me, a very funny point.

But, one thinks, fast forward to today, and this country. I’m sure I must count myself among millions when I wake up in the middle of the night, palms sweating with one thought on my mind – “Why is John Prescott?”

And here in a blinding flash, is the answer. Blair is not daft. He (or one of his staff) undoubtedly reads “Private Eye”, so sometime in the past, some form of visitation has occurred, and the strategy for Blair’s immortality has crystallised in front of them.

Prescott for Deputy Prime Minister – it’s Oh so simple. The great ideas always are. And keep him there through thick and thin, or until Blair’s reign ends. Brilliant!

But - meanwhile in America. Why hasn’t Bush picked up on this? He’s hardly the nation’s favourite son, and picking Dick Cheney for Vice President is nothing like as effective as Blair’s choice. Perhaps Tone should ring him and have a bit of a “succession planning” discussion. You know the sort of thing –

“Yo Bush, you get rid of that dude Cheney, and pick someone who’d be really good for you. What’s Dan Quayle doing these days?”

You know it makes sense.
Posted by rogerc at 9:10 pm