I’ve just been looking back at a couple of bits on the blog, namely the two items written when the Darryl Hair vs Pakistan spat was in full flow. You felt then as if you were being chained to a single track railway line, and could see a political and expedient solution heading towards you like an express train. And that’s exactly what we’ve seen.
Inzamam got off as lightly as the administrators could conceivably manage, and Darryl Hair was last seen being driven off at high speed towards the nearest sunset. The friendly fire now seems to have spread and resulted in some Pakistan "collateral damage", namely Zaheer Abbas, the Team Manager, who can now add “Ex-“ to his job title, and also Shaharyar Khan, who seems to have had enough, following Younis Khan refusing to act as captain while Inzamam is on the bench.

Reading between the lines, if that’s possible in the Pakistan Dressing Room, it does seem to confirm that there was a good bit of pushing and shoving in that room to avoid returning onto the field of play during that match, and some people are now paying the price.

Meanwhile, Umpire Hair, who has been castigated unfairly for upholding the rules, seems to have reached the end of the line. It does seem unfair – he’s not there to interpret the rules, he’s there to implement them, and it’s difficult to see where he went wrong.
The solution seems simple to me. The umpire doesn't change the rules - that's anarchy. The Administrators are there to change them, so if the rules are so out of touch, perhaps they should have sacked themselves. Now, I wonder why that didn't happen.

You don’t shoot the pianist - although in this case, that seems exactly what they’ve done.

To end on a lighter note, the picky below is a lovely letter from “Outraged of Tunbridge Wells” which shows how it should have been done. Can you imagine the Education Secretary, Alan Johnson supporting such an approach? 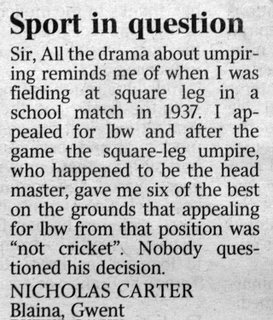 The floggings will continue until morale improves!
Posted by rogerc at 12:15 am