In a list of “Greatest Ads of All Time”, this one gets somewhere in my Top 10. Remember it?
Press centre arrow to start

As part of a long running sequence of the best car Ads EVER, it sits right on top of the pile.

And here’s another from the same camp.

Today, the ear-ring would be worn by a bloke.

An advert can create an impression, a feeling and a perception about a product, a desire to try it out. Be it a chocolate bar or a car, the advert gets you through the door. You buy the bar of Chocolate, you try it, and if you like it, you’re hooked. If you spit it out, no amount of the best advertising in the world gets you to buy another one. For the car, the advert is a much more powerful thing. It’s a fundamental plank of the Image and the Brand – that nebulous, but Oh so Important thing which can command Millions, even Billions of extra money for the Manufacturer from the buying public.

Just ask Vauxhall what they’d give for VW’s image, ask why Ford spent $1,600 million buying the Jaguar name 15 or so years ago, wonder why Cadillac are falling flat on their face trying to sell luxury saloons in this country, and then ask why Peugeot, Renault and Citroen squander hundreds of millions of pounds even bothering to try. IMAGE, my boy, IMAGE.

As I say, the advert only gets you through the door – the product has to deliver – all of which leads me to the subject of this little celebratory piece – the Volkswagen Golf. 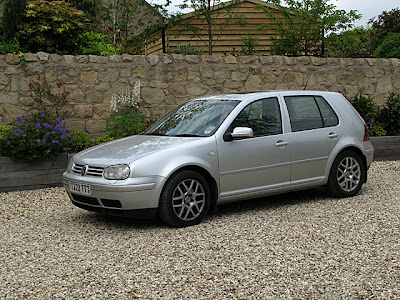 IT HAD TO BE SILVER, DIDN'T IT? 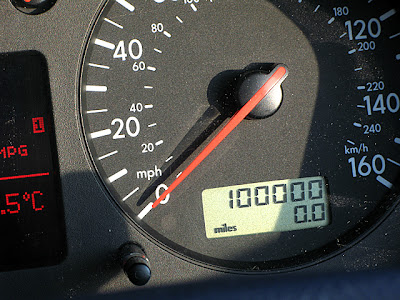 And, apart from the bulbs which give up the ghost, new brake pads, new windscreen wipers, a new camshaft belt when the service manual advised me to, and a couple of minor niggles resulting from my failed attempt to mate one of my front headlights with the very inviting rear of an old Audi, NOTHING has gone wrong with it.

It starts when it’s supposed to, stops when I want, and doesn’t stop when I don’t want. It does everything a car like that should.

It averages over 52 mpg (It’s a diesel), accelerates when required, like a little rocket, uses no oil between services, rides and handles tolerably well, and the interior fittings, which are a model of restrained modern elegance and design, scrub up, even now, like new.

Yes. I could write VW a (shortish) list of things they should improve, but none are that important. The Autocar Road testers whinge that it doesn’t handle or ride like a Ford Focus (they’re right, it doesn’t), but in the real world when most of us are not looking for the last ounce of performance, that’s totally irrelevant.

It really is a marvellous thing, and I have grown to respect, admire and occasionally love it. The way it’s going at present, it doesn’t feel as if the next 100,000 miles will hold any great traumas. And if it does have to go, you can understand that the decision about its replacement is really quite simple.

All down to a short advert where I still believe the girl binning her jewels and fur coat was Princess Di!

There are things I can not understand but I will learn it. I think nothing is too late. Then I realized that I had improved a lot.
http://colorswitchplay.com