"Fifty years on from now, Britain will still be the country of long shadows on county [cricket] grounds, warm beer, invincible green suburbs, dog lovers and old maids bicycling to Holy Communion through the morning mist".

The one quote you tie immediately to John Major. I’m not actually sure he was that well advised to come out with it, if what he wanted was to create a broad church of consensual nostalgia throughout the country. It probably made, all too clear, the real distance between the more down-trodden parts of say, Manchester and Birmingham, to name but two, and 10 Downing Street. But, there you go. I don’t live there – I live here.

This author’s eyes see where Major was coming from, living where I do, in a small village in rural Shropshire, where there are a lot of dog lovers, where, if the village had a pub, the beer would probably be warm and where old ladies still dutifully attend Holy Communion, sometimes on foot, sometimes on a bike, and sometimes, very, very alarmingly, in a car.

And yes, the village has a church, of Norman origin, and next to it, a lovely local Cricket ground, where every Saturday, and most Wednesday evenings, the “long shadows” fall on twenty two men, good and true, attempting to beat seven bells out of each other with a leather cricket ball and a willow bat.

Yesterday afternoon, I took the Nikon down to the ground to take a few pictures of the gentle slumber/ritual slaughter which was then in full flow. It was a beautiful evening, warm, sunny, with lovely slanting light. If you really wanted to see England at its nicest, then standing alongside me watching the proceedings would not have been a bad place to start. 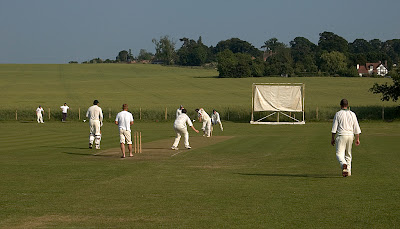 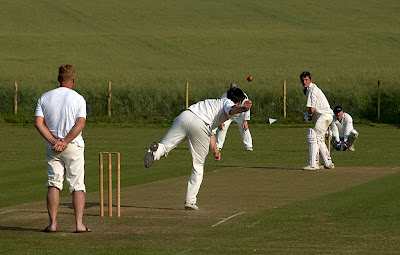 A CLOSE UP OF THE ACTION 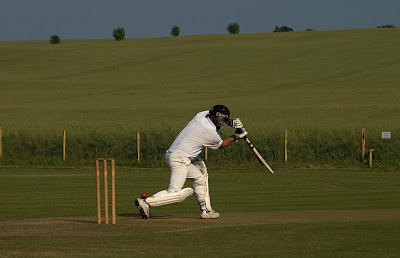 A BEAUTIFUL COVER DRIVE, STRAIGHT OUT OF THE COACHING MANUAL, EXCEPT THAT HE MISSED THE BALL, AND 0.02 SECONDS LATER, THE BAILS WENT EVERYWHERE 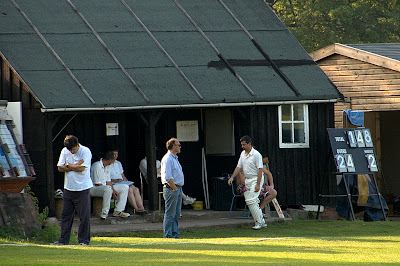 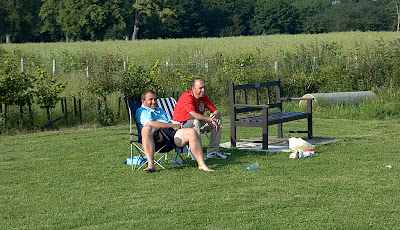 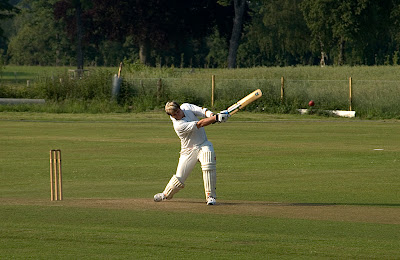 THIS GUY, WHO CLEARLY POSSESSED, AND HAD WATCHED, ALL KP'S TRAINING VIDEOS, WAS TERRIFIC - THIS HIT WENT STRAIGHT OUT OF THE GROUND FOR 6, INTO THE ADJOINING RAPE FIELD - LEADING TO - 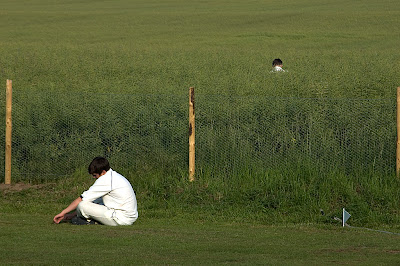 YOU DON'T GET THIS AT LORDS - LOOKING FOR THE BALL. SOME PLAYERS SEEM LESS KEEN HERE THAN OTHERS! 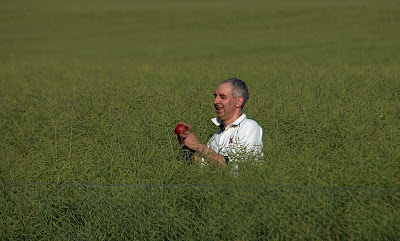 PUTTING YOUR HEART AND SOUL INTO IT 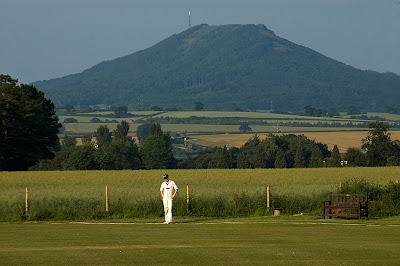 BILLY NO-MATES, AT LONG ON, WITH THE WREKIN IN THE BACKGROUND - TELL ME YOU DON'T LIKE THAT!