FLINTOFF - CAUGHT FOR EVER

What makes a good photograph into a great one?

Most pictures that get published today are good photographs. They have to be otherwise Picture Editors would lose their jobs. The equipment that’s available today helps an awful lot, what with Autofocus, sophisticated auto exposure systems, machine gun like continuous shooting, and storage cards whose memories are almost infinite. The quality of the lenses are better than ever. What’s not to like?

But the art of turning out a “great” picture is something else. You can’t manufacture them, and that’s where the art comes in. Greatness, in almost all walks of life, is a very elusive thing, and no different in the realms of the photograph. They happen almost randomly, and I suspect that the author of the image probably doesn’t know at the time he’s taking it, just what a gem he may just have created.

As one of my little pleasures in life, I sporadically visit Photographic Societies to talk about this. Camera Clubs can be a bit narrow in their view of the photograph. Many people there like a set of “Rules” to govern the “good” photograph, the formulaic, churn it out type of approach which can result in lots of good pictures, but very few “great” ones. So, I worked up a lecture entitled “The Best Photograph Ever Taken”, where I selected 100 famous images starting from the first time Daguerre and Fox-Talbot created the photographic image (around 1830) until the present day. Most people will recall many of the images – they’re the sort to which the word “iconic” is applied. It proved quite popular, so I did a follow up, which covered the “Best Sports Photograph Ever Taken”.

When you look at all these pictures, intriguingly, the first thing that hits you is that many of them do not “obey” the “Good Photograph” rules. They are not pin sharp, they do not necessarily have the subject in the “right” place. Bits of the subject are cut-off in the frame. Often the subject is dead centre. And, and, and. All of which “break” the rules. But it’s still “great”.

So there’s something else which attracts us to these images – which makes us want to have them on our walls, and look at them over and over again. In my humble view, it’s little to do with the quality of the equipment, and it’s all to do with the individual behind the camera, deciding where to point the lens, and when to press the shutter. It’s so often, the emotion that the picture captures which makes it so good. The photographer needs to have that in his mind all the time he’s snapping away. You need to be an artist, in the same way that Turner, or Monet were. They saw what was in front of them, but then turned it into something special and individual – a personal shaft of light onto something we’d all probably seen before, but never trapped it in the way they did.

The same applies to the great photograph. Sometimes these images stand on their own, and sometimes they need a bit of explanation – this one I’ve chosen needs a few words.

You may have gleaned from this blog that I am partial to cricket, and cricket provides here one of the very best sporting pictures ever taken. The reason it gets mentioned now is that, 4 years on to the day, we’ve just finished the 3rd Ashes Test match against Australia in Birmingham, and my mind can’t help but flash back to that Sunday in 2005 when the picture was taken. We had the best Ashes Series ever here in that year, and there is one image from it, which sums it all up for me, and is as perfect as it gets.

It was the nail biting-est finish you could ever imagine. Both teams had been going at it, hammer and tongs, and on the last day, Australia had what seemed like the forlorn chase of around 100 runs to win the match, with only 2 bottom of the order wickets left to fall. Except the Cricketing Gods had other ideas.

It was going to be the matter of a few minutes work that morning, a couple of decent balls and there you go. Bang, bang, job done. Only, of course, it didn’t turn out like that. Shane Warne, and Brett Lee, the Australian batsmen remorselessly hit their way towards the target, until Warne was out, bizarrely Hit Wicket, to be replaced by Kasprovich, the last Aussie batsman standing. Now Kasprovich is NOT a batsman. But, snicks here, a dropped catch there, and the deficit was reduced to less than 20, then down to single figures. The crowd was so quiet, you could have been in church.

There were people in the crowd with their heads in their hands. A colleague, who was there, and works in the next office to me, tells of grown men, who had paid good money to see England thrash the Aussies that day, sitting resolutely facing the outer wall of the ground, completely unable to watch what was going on. The deficit came down and down, until they needed just 2 runs to win, and then Kasprovich nicked one off his gloves from Harmison, clearly going for 4, down the leg side, and Jones, the Wicket Keeper held on to it brilliantly. The crowd, according to the commentator, went “ballistic”, and, to a man (at least all the English ones!) they rose up as one, exultantly. The England team were in a state of utter shock, one running aimlessly round in circles on the boundary, and the rest of them jumping on top of each other completely out of control.

The two Australian Batsmen were totally distraught. So, so near that they’d both probably come to believe in the final few moments of the game that they were going to pull off the greatest “against the tide” win ever, and yet, at the last gasp, the merest touch of a glove on the ball meant that they’d failed. Brett Lee was crouched down on the pitch in tears, and Andrew Flintoff, who’s not normally known for his sensitivity, broke off from his personal celebrations. He went over and crouched down beside Lee, put his arm round him, one fast bowler to another, and spent a few priceless seconds commiserating with him. A beautiful, emotional and very moving sporting moment.

Someone had his camera at the ready, was in exactly the right place, realised the significance of the moment, pressed the shutter exactly at the right time and captured it to perfection. Here you have the culmination of a great sporting event, one of the greatest I ever expect to see, frozen for ever in one single image. One picture which, every time I look at it, brings me out in goosebumps.
Just to build on that, who was it that did exactly the same to the Australians after they had lost another exiting test. Yes - Andrew Flintoff. 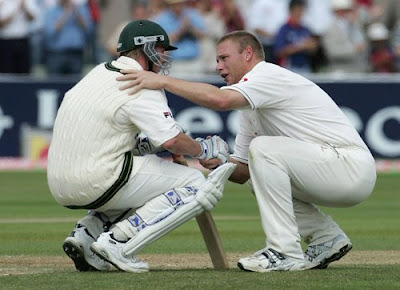 In reality of course, there’s no such thing as the Greatest “anything” if it all comes down to a subjective judgement. If we’re talking about running the 100 yards, then Usain Bolt gets it, no argument. The clock says so. But, if it comes down to one person’s opinion, well that’s it, a matter of simple personal, subjective judgement. You may be very knowledgeable and have a degree on the subject, and a lot of people may either agree with you or be persuaded by you, but that doesn’t make you “right”. You can explain until the cows come home why you think that Bethoven’s Eroica or the Sex Pistol’s “God Save the Queen” is the greatest piece of music ever written. But if I think it’s Rolf Harris singing “Jake the Peg”, your opinion, to me, is quite irrelevant. Jake The Peg gets it.

And it’s the same with these pictures. On the basis that, if you gave me a choice of one, and one only, sporting image I’d like to have hanging on my wall at home, this is the one I’d pick, then that’s good enough for me. End of story.

The Greatest Sports picture ever – unless you know differently!