A WHOP BOP A LULA, A WHOP BAM BOOM 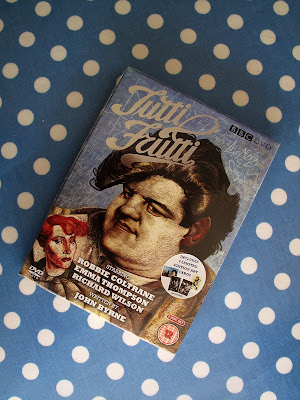 The DVDs of “Tutti Frutti” have arrived from Ama**n. I can’t tell you the full name of the supplier, because it’s turned up 2 days before the official release date, and if I watch it within the next 48 hours, someone will have to kill me. This is quite pathetic really. I’ve just taken a photograph of the unopened box. I’m 63, for God’s sake, and I’m behaving like a child.

But before we get to see it all, we’ve got to open it. Ah yes, the DVD packaging. What is it about DVD packaging that makes me want to stab someone deeply through the heart? You’d think, for a product that costs some £30, they’d set out to look after the customer, make it easy for him, and put one of those little strips of narrow plastic that you simply pull all around the box leaving the plastic film in two easily separated parts. A bit like they do on a 40p Kit Kat bar. Oh No – that would be too helpful.

So we start the assault on the box. Firstly, it’s the shrink-wrapped plastic that’s so tight that you can’t begin to get a purchase on it to pull it apart like you do with a packet of crisps. The tension in the cellophane is so strong that you wonder that the DVDs can withstand the forces being applied to them. All you get here is a few bruise marks on the DVD box where your nails have skidded across the virgin surface of the box. So it’s secondhand before you’ve even opened it. Excellent.

So you give that one up and try to pick the edges of the folded over bits at each end apart so you can get into it that way. But they’re way ahead of you - they’ve thought of that one ages ago, and got it totally covered. The glue they use is quite impregnable, and has welded the two folds together so well that separating them again is quite out of the question. The brilliant malevolence of the adhesive technology they use has meant that the glue reaches absolutely to the edge of the plastic film all the way round the packaging, so there’s no weak link to allow you even the slightest iota of purchase for your despairing finger. All you get is worn nails and an equally worn temper.

So, desperate measures - out comes the LeatherMan. We now have to use our skills in keyhole surgery now, and make a deep incision along one edge of the box to allow us to release the tension and allow us in. But there’s a last trick, a booby trap they used here. The plastic film is just strong enough to resist a gentle pressure from the sharp blade of the Leatherman, so you have to really give it some welly. The result is that it gives up almost explosively and you push all the way through the film, and stab a hole in the box, just where you’re going to be able to see it for ever.

Your pleasure in looking forward to some hours of utter joy has now been changed into a simmering resentment at the manufacturers, whose name, wouldn’t you know it, is written is such small print on the box as to be undecipherable. Quelle surprise!

Anyway, with my confident, firm-handed surgeon’s approach, I’ve made the incision and by dint of immense control, and the use of a freshly sharpened blade, the cellophane is now off, and we’re into the box. Swab, nurse.

I look inside for a profuse and detailed apology from the BBC for making me wait 22 years for all this. Absolutely nothing. There’s actually no insert to explain anything about the DVDs. No cast list, no history, no extras, no episode listing, absolutely bloody nothing! Just 2 DVDs and four postcards each with a (rather good, I have to say) drawing of a member of the cast. Ho, Hum. Someone at the Beeb is really on a cost cutting roll, or are they really determined to piss off the customers. So, what’s new?

I’ve written about this 6 part TV series before. How it was shown twice in very quick succession on TV in 1987, at which time I, together with a whole raft of very discerning viewers, raved about it as an absolute classic. Then - nothing. We had all the rumours as to why it was never shown again, but it’s taken 22 years for whatever machinery had to be set in motion, to get it available for a new generation of people who’ve never even heard of it.

This far on now it's finally in my hands, I now get those doubts creeping in. Was it really as good as I thought it was? Have the rose coloured spectacles of 22 years bent my critical judgement faculties? A bit like the way the never ending length of summer as a child has changed now I’m over 60 – it’s over in a flash today. Have I moved on over that time, so that what I thought was brilliant then, no longer excites me? Has the humour simply dated? I’m worried, but something makes me think it’ll be alright.

I’ve built this up in my mind to be quite a thing. I’ve written a couple of times about it all on this blog, eulogising and putting it firmly in my Top 5 TV series ever. So, if the idea of wallowing in the disastrous but hilarious antics of a group of aging, delusional and failed Scottish musicians and the women who love and support them despite their manifest failures arouses your interest, then go out and buy it. John Byrne’s script is acerbic, black and terrific. To paraphrase Peter Kay – it’s the best thing to come out of Scotland since the M6 – or is it the A1?

So, if you don’t mind, I’m off round the Dark Side of the Moon for a while to join Danny, Suzi Kettles, Fud, Bom-ber, Vincent, Dennis, Janice (Miss Tonerrrrr!) and the most miserable record producer the world has ever seen - Eddie Clockerty.

Hope it lived up to your memories!
;-)