The Kangaroo Paw flower is a very attractive plant. It has even been selected as the floral representative for Western Australia, so emblematic is it. It is so named because in its unopened form it looks, surprise, surprise, like a Kangaroo’s Paw. Simple really. Except that I’ve never studied the paw of a Kangaroo. 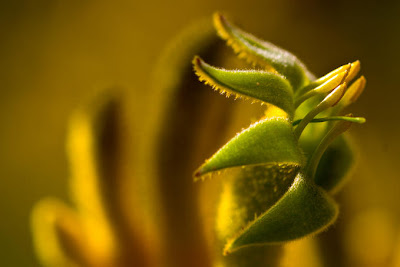 Its medicinal benefits, I have to say even at my advanced age, have bypassed my attention and awareness for greater than 60 years. Still you live and learn.

I was showering away this morning, and grabbed the bottle of shampoo to wash my hair. Purchased, I submit in my defence, by the other person who lives in my house, it was called “Aussie – Mega Shampoo”. No, I don’t understand either.

The small writing on the front of the bottle soothes me with the vital information that it “cleanses without the build up that causes the hair to droop.” That will be very handy, since, following a session with Shirley, my hairdresser late last week, there isn’t one hair on my head longer than a quarter of an inch. The longer we talk, the more she cuts my hair, and we had a very long conversation last Saturday about me being on the television and radio during the week. And as I kept talking, she kept cutting. Hence the virtual baldness. 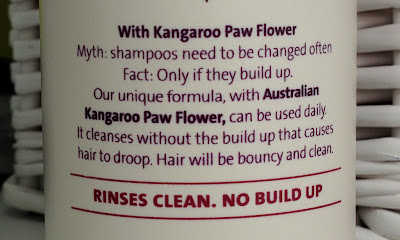 The front of the bottle goes on – “Hair will be bouncy and clean”. Mmmmm, I think not. Clean, perhaps, Bouncy – no bloody chance. It looks like a less frenetic Shane Warne, and I don’t think that’s much of a compliment, since I last described his hair as looking like an explosion in a Mattress Factory.

Anyway, off we go. We squeeze some out. I have to say this is the first time I’ve had a really good look at it. I know this is a family website, but the only way I can describe it uses an analogy that involves the description of the colour, texture, and, I suspect, feel of the contents of a well used condom. Ugh!

And I’m just about to rub it vigorously into my beautiful recently coiffured follicles! And then, even worse, into those hairs about 30 inches nearer the ground which don’t see the light of day quite so often. Yikes.

And I’ve got it all on my hand.

Things are going from bad to worse now.

So I turn the bottle round to see what’s on the back. Something, I idly anticipate, about the tender process where nubile Australian lasses gently masticate the Kangaroo Paw flowers between their toes to extract the delicate juices, mix it with rare and beautiful herbs and spices, and add a touch of soft soapy something or other, so they can then ship it all off to a gratefully waiting collection of ardent customers on the other side of the world?

Ah well, you know there had to be a problem didn’t you?

The really small print on the other side tells you what’s inside the bottle. Now, call me old fashioned, but this lot sounds like something that would result from Macbeth’s Witches being seconded to the Development branch of the Iranian Nuclear Bomb Team. 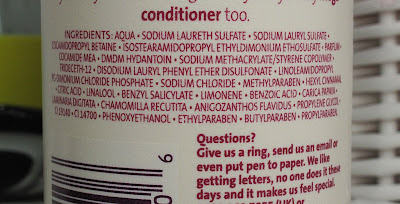 I did Chemistry to a reasonably high level when I was at school, but none of the names (alright, I agree not “Aqua” or “Sodium Chloride” – why in heaven’s name do I need Salt in my shampoo?) meant anything to me. There were 31 substances – that’s the only word I can think of here – in the bottle apart from the “Aqua”. And two of the really scary ones were not even allowed a name using alphabetic characters.

We had CI 19140, and CI 14700. Shades of Agent Orange here. Actually that’s nearly right, because when later you Google them, you find they are colourants which as far as I am aware can be dangerous if injested, ones we try really hard to avoid our children getting anywhere near. And I’m about to smear the stuff all over my most sensitive parts.

So I’m standing there wondering what to do and thinking evil thoughts about the Australians. Is this a subversive act by some miserable Australian gits to get back at those Pommie Bastards who sent them over to the other side of the world as penalties for their crimes two hundred years ago, as well as, at the same time, anticipating a 2-1 England win in the Ashes at the Oval?

And then you read the even smaller print, and down to earth we come. This potion – Eye of Newt and Toe of Frog etc. is actually produced in England by a company whose Head Office is in Weybridge in Surrey, a sleepy town where I spent three years of my education learning about aeroplanes.

Just to make my day, I suppose someone will now write in to say that Father Christmas doesn’t exist. Perhaps I should do what the manufacturers ask in the smallest print on the bottle.
"... Put pen to paper. We like getting letters, no-one does it these days, and it makes us feel special."