I DON'T LIKE GAWPING - BUT SOMETIMES YOU CAN'T HELP IT

The last few days have not been at all pleasant for our family. Senior Dog collapsed on the floor in front of us following a visit to the vet mid week. We rushed back (at somewhat illegal speed I might add) to find that she had a tumour on her spleen, and this had just burst, necessitating a 3 hour emergency operation. Her life held by a thread for a couple of days, and it is only now, five days on that she’s showing decent signs of recovery.

Now, the world is divided into two parts – those who love dogs and those who don’t. To us, they’re a bit like children, and we love them to bits. Seeing them like we have over the last few days stops you dead in your tracks, and you have to look around for something to take your mind off the waiting.

Ah, methinks – the 4th Ashes Test is on at Headingley – I’ll watch that, and see England beat the hell out of the Australians. That will make me feel better.

Over the last three days I’ve been gawping, and that is the word, at the television in what I can only describe as morbid fascination. Rabbits in Headlights, in the way you can’t take your eyes off it all. The car smash on the other side of the Motorway. A performance from England of consummate and award winning ineptitude and spinelessness, with long periods of chicken livered, yellow bellied incompetence thrown in. Batsmen who give up the ghost – 9 of the 11 players (let’s excuse Cook and Prior here) made 18 runs between them in the first innings. None of the 9 even got into double figures and they all languished way behind Extras who, in comparison with the 9, played an absolute blinder.

And then the bowling. At least, they would have seen at first, very close hand precisely how to get a side out on this pitch. In a 34 over masterclass, the Aussies had shown them exactly how to do it. Tight line, off-stump, fullish length bowling. Get it there, give it time to swing a bit in either direction, get the batsman coming forward, get the snick into the slips or gully, and Bob’s your Uncle, they’ll be out for 100 or so as well. Nine of the England wickets fell like that.

So, what do we get? Short pitched deliveries, all over the place with bags of width for people like Ricky Ponting to have an absolute field day with. If you’d asked Ponting where precisely he would love you to bowl at him he’d have said “Keep it exactly where you are at the moment, Old Son. That’s just about perfect”.

So they did. The Australians must have thought it was Christmas, and all their birthdays, all at once. Anderson, at least could say he’d got an injury, but I seriously wanted someone to hit Harmison over the head with a bat, and a very heavy one at that. His gormless stare, with an inane, quizzical look on his face, as the ball disappeared yet again to the boundary made you wonder if his brain was actually capable of functioning.

England have recovered a bit of face this morning, with Broad and Swann showing a bit of skill and balls in facing up to what is still one of the least good Australian sides we’ve had here for a couple of decades. But they are England’s Nos. 7 and 8. What were the rest doing? Try Bopara 0, Bell 3 and Collingwood 4. Another non existent middle order performance. Yes, I know Flintoff and Pietersen are injured, but England need to get used to the idea that one of those is never coming back.

But I keep gawping at the endlessly repeated replays, not quite believing what I’ve seen, willing it to be different.

That’s what I’ve been doing, except in my particular case there’s another meaning of the word which is not in the Dictionary. This one’s GAWP – the Generalised Ashes Watching Position. For explanation, see the pictures below.

The first is GAWP 1, the basic position adopted in this match whenever England are at the crease – 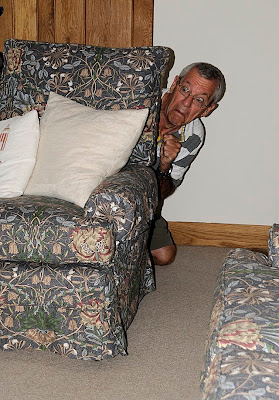 GAWP 1
And GAWP 2 – the specialised Advanced version, only to be used when Ravi Bopara comes out to bat at No.3 – (you have to be very quick here, it doesn’t last very long), or when Steve Harmison gets the ball in his hand. 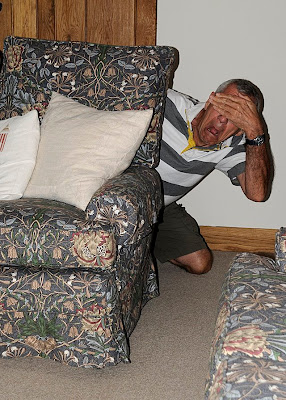 Not, I suspect though, for too much longer.

Sorry to hear about your Senior Dog. I hope she makes a full recovery. And, as a fellow dog-owner, I sympathize with the effect this incident will have on your wallet...