I'm on a Watergate kick at the moment. A couple of postings ago, I showed a tremendous set of images taken from the "Washington Post" archives which had, as well as showing the all "Usual Suspects" without their Prison Numbers, a really smoky, atmospheric "You were there" feel to it all.

The one guy who was completely missing from this set of images, and who became an overnight star through the film "All the President's Men", was Deep Throat. Deep Throat was the insider who knew everything that was going on about Watergate inside the President's team. It was he who kept Bob Woodward, the "Post" Journalist, on track throughout the whole investigation. The two of them held meetings, just like in the best Spy films, in Multi story Car parks at 2am, so as to avoid Deep Throat's identity ever being revealed. In the film, he was only ever seen in sillhouette, rim-lit with cigarette smoke drifting very artistically against the car park safety lights, but his existence spawned a whole raft of theories about who he was.
He had to be someone very, very near the Top in the Government System, otherwise he simply wouldn't have had access to the Gold Standard information he knew. So he had to take great care not to pass on anything that would allow his identity to become obvious to those seeking him out, bent on destroying the "Post" and its sources.

And throughout the whole time the story was developing, no-one apart from Woodward and Bernstein knew who Deep Throat was. Even Ben Bradlee, the newspaper's editor, was not in the know - and still he backed his journalists with the story. Brave man.
But now, some 30 odd years after the event, following innumerable efforts, books, investigations, rumours, claims and denials, he has been identified as W Mark Felt. Felt was the Assistant Director of the FBI at the time. Almost everyone in the Administration came under suspicion, but it is really quite amazing that Felt's name has been keep secret for so long, thus putting the last big piece of Jig-saw into the Watergate puzzle. When you read about him, his fasacinating life, and the cunning way he involved himself with Woodward, you imagine a real James Bond type.
All the pictures of the man show him now as a very frail 91 year old, but there are a couple of pictures which show him much earlier in his life. The one below, in one simple image, briings into stark relief, the gulf which exists between the way things are in America and the way they are here. Just remember, this man is 2nd in Command of the America's premier policing body, reporting through J Edgar Hoover, directly to the President of the United States. 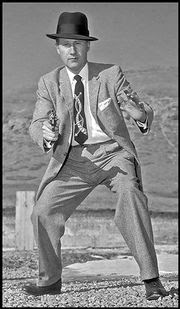 In your wildest imagination, can you imagine in this country, Stella Rimington having a picture to match this in her personal picture albums. If she has, someone would pay an awful lot of money for it. This is the best we can do in the meantime! 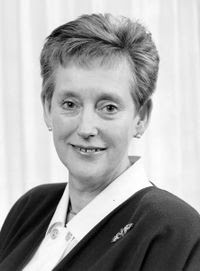