We’ve had “The Producers”, a spoof film about Hitler by Mel Brooks. We’ve had "Thatcher – The Musical”, and now, as if we haven’t suffered enough for Goodness sake, we look forward to “Prime Minister – The Musical”, a frothy confection about the life and times of Anthony Charles Lynton Blair.

But, bless it, the letter’s page of the "Telegraph" has, over the last couple of days, tried its hardest to remove the cloud of depression that this ghastly thought has generated in me at least. One correspondent (a Mr Miller of Liphook Hants) firstly spilt the beans that the poor soul under consideration to play John Prescott in this new masterwork is, heaven help us, none other than Meat Loaf. Now, if ever you want a definition of the word “inspirational”, you’ve just read it.

But one wonders here whether our letter writer has stumbled on something akin to Anthony Blunt, The Third Man or Deep Throat (the Watergate version!) and discovered one of the great hidden secret stories of our age. The more you think about it, the more you conclude that there’s more to this tale than meets the eye.

Let’s look at the evidence. It’s fair to say that Prescott’s behaviour patterns are not what you’d expect of a Premier League politician. He is the very model of incoherence, grunting monosyllabically when you’d expect some attempt at rudimentary use of Common grammar and syntax – you know the sort of thing – Subject, Verb, Object. You expect from such people a vision, a way forward, a mesmerising, blazing oratory to energize us all to take up his new ideas and follow him at least towards, if not into, the Sunset.

And what have we got? A potentially great Croquet player. A man who spits his teeth out at audiences. A fairground employee’s level of ability in the noble art of Fisticuffs, just because someone landed an egg on him. A “serial groper”, who “just leapt on me at one party and his tongue was halfway down my throat” according to an ex (is that surprising?) - Labour Party Press Officer. A man who thrives on big cars, big houses and Big Macs. Now doesn’t that sound more like a rock star than a humble politician.

Perhaps our doughty correspondents have just seen what should have been obvious to us all along. We all thought when JP went to the USA last year and “allegedly” accepted hospitality at the ranch of Philip Anschutz, the billionnaire owner of the Millenium Dome, he was pushing the position of the Deputy Prime Minister a bit close to the line, seeing he was the Government official responsible for the regeneration of the site.

Perhaps, however, this was all a brilliant cover-up. Perhaps he was actually in the recording studio in America covertly working on the album for this new Musical. Perhaps they’re getting Meat Loaf to write all the songs, before he goes on tour with the show when it’s finished. There have been rumours that Meat Loaf and JP have been working together for some time on this project, Mr Prescott piecemeal, Mr Loaf more on a well, wholemeal basis. Perhaps even all the timing kerfuffle surrounding the PM’s departure is actually being arranged to allow Blair (Tony, not Lionel) to join the cast as lead guitar when his current job is over.

The second “Telegraph” correspondent (a Mr Lisney of SW6) even scoops the name of one of the songs in the show, which really confirms everything written above. You may still think all this is conjecture, but, as the BBC says in these instances, a document has just “come into my possession” which shows things to be far more advanced than we’d previously suspected.

The album cover for the Musical is already completed, and this blog presents it as a World Exclusive. Clearly derived from Meat Loaf’s previous albums, it shows our Prezza riding the famous motorbike which started Meat Loaf’s recording career off. The colour of the new album’s cover reflects JP’s new found Green, low non-Yeti sized Carbon Footprint leanings - only one car, only one House, only one woman.

And the title, which is so brilliantly scooped in My Lisney’s exposé confirms it all – “Bat Out of Hull”. 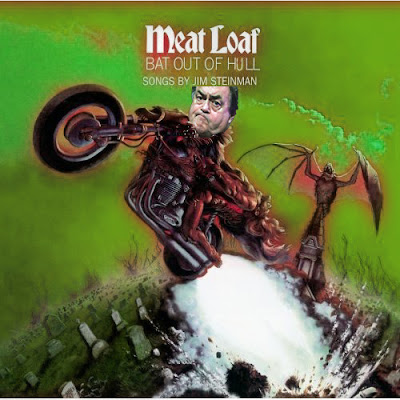 Remember, you saw it first here!

Meat Loaf,
prescott,
Bat out of Hell
Posted by rogerc at 1:25 am