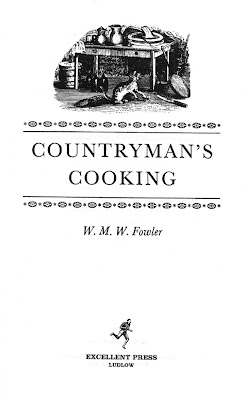 The first few words of a book are like a hook. If the author get's the right ones down, you’re captured. This works even with something as potentially uninspiring as a cookery tome. Try this for size –

“This book is written for men. Men who, through choice or circumstance, live on their own, so that they can give a small dinner party, and at the same time remain on speaking terms with their friends.”

Ten seconds to read it, and the writer had ensnared me, and I’ll bet you want to know what follows as well. Excellent.

My Brother in Law sent me “Countryman’s Cooking” by W.M.W. Fowler as a totally inspired birthday gift, and I found it a complete joy to read. You don’t need to get more than a couple of paragraphs in, to realise that it was written when the words “political” and correctness” had never been used in the same sentence, and you’ll go a long way to find a fresher and more riveting read. Having read the book, and rummaged around on the Internet to fill in a bit of the man’s background, a terrific story emerges.

IT was published in 1965, and immediately bombed, which neatly dovetails in with the fact that Fowler (Willie to his friends) was a Lancastrian who flew in, yes, RAF Lancasters during the Second World War. He was shot down, and spent some time in Stalag Luft 3, where at one point in the book, he records having slaked his hunger by “stewing the Kommandant’s cat with one black market onion!” Brilliant.

He mixes recipes based on cooking all manner of meats and fish, in a robust, forthright, Steak and Kidney Pudding sort of way, with sharp, and often hilarious anecdotes which tell you exactly the sort of man he was. Clearly no stranger at all to female company, he was not interested in what he saw as the frothy parts of cookery, and arranged for various female “sous chefs” (probably in both senses of the word!) to attend him and “do” the vegetables and the pastry for him. He would invite “Luscious Lettie” and “Flakey Flossie” over - “Lettie darling, do come over. I’ve got a cucumber and some tomatoes, and all sorts of things. You’re so much better at dealing with them than I am.” One does suspect that the evening meal that night would have been eaten cold. A similar fate awaited Flossie – I simply can’t imagine what Delia would have made of it.

A book like this only works if the quality of the recipes, which are its backbone, stand up to scrutiny. All I would say is read them, and you will immediately have no doubts on that score. Just read the ones for Steak and Kidney pie and the Beef Olives if you’re in two minds about it.
To catch the mood of the original, the book also reproduces the original plates one of which is shown at the top of this piece.

One recipe which has you well skewered when you’re reading it is in the Poultry and Wildfowl Chapter, and addresses the “classic recipe for the preparation and cooking of a Cormorant” – how PC is that? Just read this –

Having shot your cormorant, hold it well away from you as you carry it home . . . these birds are exceedingly verminous and the lice are said to be not entirely host-specific.

Hang up by the feet with a piece of wire, soak in petrol and set on fire. This treatment both removes most of the feathers and kills the lice.

When the smoke has cleared away, take the cormorant down and cut off the beak. Send this to the local Conservancy Board who, if you are in the right area, will give you 3/6d or sometimes 5/- for it.

Bury the carcass, preferably in a light sandy soil, and leave it there for a fortnight.

This is said to improve the flavour by removing, in part at least, the taste of rotting fish.

Dig up, skin and draw the bird. Place in a strong salt and water solution and soak for 48 hours.

Remove, dry, and stuff with whole, unpeeled onions . . . the onion skins are supposed to bleach the meat to a small extent so that it is very dark brown instead of being entirely black.

Simmer gently in seawater - to which two tbsp of chloride of lime have been added - for six hours.

This has a further tenderising effect. Take out of the water and allow to dry. Meanwhile, mix up a stiff paste of methylated spirit and curry powder. Spread this mixture liberally over the breast of the bird.

Finally, roast in a very hot oven for three hours. The result is unbelievable. Throw it away. Not even a starving vulture would eat it.

If that doesn’t get you looking for the ISBN number and the stockist of the book, you’ve got no soul!