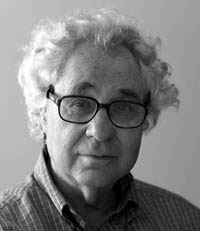 ELLIOTT ERWITT
The name of the photographer Elliott Erwitt does not fall easily off the tongue, or come easily to mind. But, in my view, he is a strong claimant to the “World’s Best Living Photographer” award. Like so many other top class photographers he came from Eastern Europe, but has spent all his life in the USA. The product of a Russian dilettante Jewish father, and a rich Russian/Greek Orthodox mother, they moved firstly to Italy, and when forced out by Mussolini, caught the last boat out of Europe to start a life in America just after the Second World War began. You could say that this unusual start probably affected his view of the way life should be led, and I suspect that we should be eternally grateful from a photographic viewpoint that it did. Married four times (“None beheaded” he quotes), he took up taking pictures to stay alive.

Apparently, one day he saw one of Cartier-Bresson’s images, was bowled over by it, and that simply was it. For the last 60 years he has been plying his trade taking pictures of a very, very polarised range of subjects.

His serious side shows him recording the Great and the Good of the second half of the last century, as a fully paid up member of (membership only by invitation) Magnum – THE greatest photo agency in the World. He took an iconic image of Kruschev and Nixon arguing with each other in the mid 50’s, where he says (and Erwitt was in earshot, and he also spoke Russian) Kruschev told Nixon to “Go screw my Grandmother”. Pictures of Monroe, Che Guevara, Jack Kerouack, Alfred Hitchcock, Casals, Roald Dahl and Lyndon B Johnson are all there as well. As a day job, that type of photography very much kept the wolf from the door. 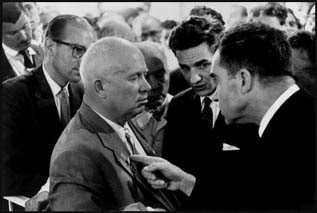 Alongside the camera he used for the formal side of things, he also kept a simple, very quiet and unobtrusive Leica, which he used, at the same time, to take pictures of life as he saw it around him, and it is probably this body of work which qualifies him for geniusdom. He usually takes one shot, often waits around for hours to get it, and there’s the picture – Bang, it’s as easy as that! "I observe, I try to entertain, but above all, I want pictures that are emotional" is the way he puts it.

He has a truly outstanding eye for the bizarre, the odd, the amusing, the juxtaposition, the tragic, the visual pun, and his body of work, all in Black and White is an unsurpassed record of humanity over the last 50 years. His pictures are sometimes criticised by people who want everything painted with a heavy trowel, as lightweight. But his utterly deceptive skills hide dedication, a total commitment to detail and preparation, a gimlet eye for the final picture, and the ability to search out images of people like no-one else. He makes it look so easy, until you try it!

Cartier-Bresson coined the phrase l’instant critique (the Decisive Moment) – Erwitt also had it, although sometimes for him it would be better titled The Indecisive Moment, given the subject he had just recorded. But if any photographer was a demonstration of the golfer Gary Player’s Law – The harder I try, The luckier I get – it was Erwitt.

Humour is a fearfully difficult thing to capture in a single shot. It takes many forms, and Erwitt’s pictures are simply the best range of images you will EVER find in this category. He has a continuing fascination with things canine, and has published a book called Dog Dogs, with pictures of 820 dogs (and a very few cats), which is simply a classic. He seems to see many parallels of the human condition in the picture of dogs which he takes.

His view is that he just takes pictures for a living - he is not an artist. "Photography is very simple," he says. "People make it so technical, so complicated, to disguise the fact. They overcompensate." But find a copy of his Greatest Hits book, rather disingenuously called “Snaps”, and in a 500 image tome, you will see the greatness of the man.

If you want to get an interviewer’s impression of him, search out an extremely good 2001 interview in the Independent. The writer, Rose George, sums him up excellently – “ … his name is probably unknown to most. If anything, he's a taker of funny pictures with easy charm, or a photographic dog-lover: His Dog Dogs book has sold 250,000 copies. A professional photographer will know him as a master of inimitably perfect composition and deceptive casualness. To the true fan, he has an eye for a shot like no other, and his work has the pathos and insight of Cartier-Bresson and the charm of Doisneau, though he has the name-droppability of neither. Hence Snaps. "Books aren't very remunerative," he (Erwitt) muses over bad German food. "But you get jobs out of it and that leads to work." His face – soulful and doleful, like Matthau without the jowls – creases into irony. "Besides, I have to do it – I've been around so long, most editors think I'm dead."

Go on then, now look at his pictures, and disagree with me.
If you want to read "World's Best Photographers - No. 1 - Franco Fontana", please navigate to the entry on this Blog for November 11th 2006.
All pictures copyright Magnum/Elliot Erwitt 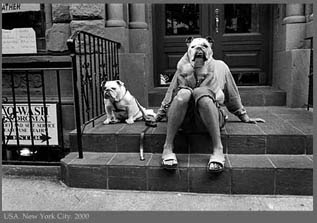 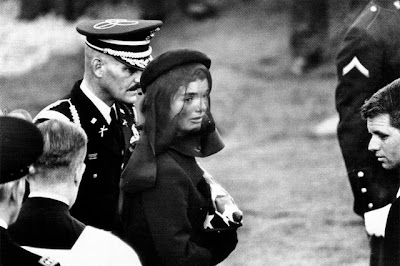 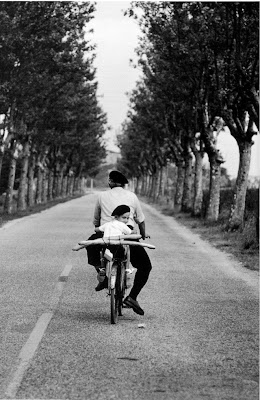 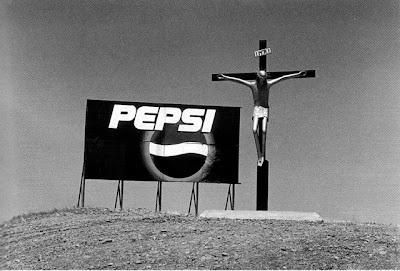 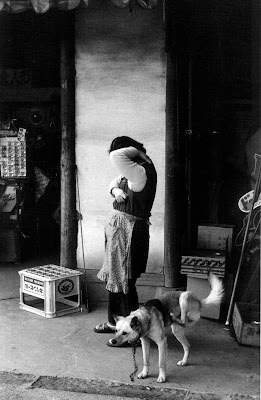 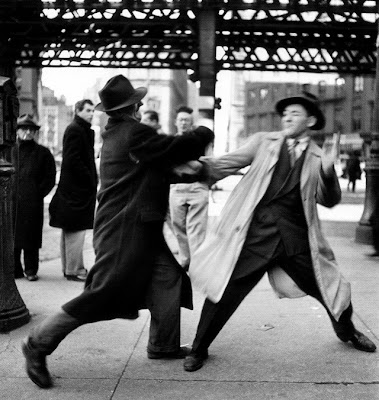 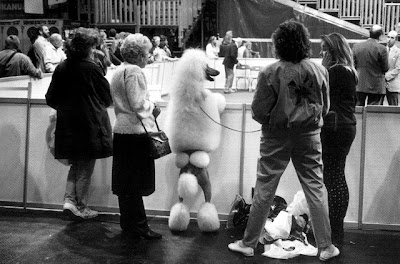 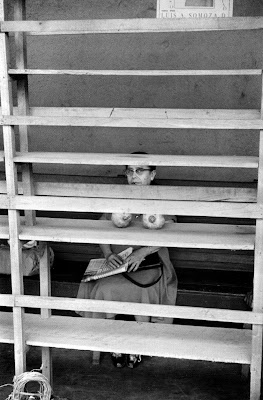 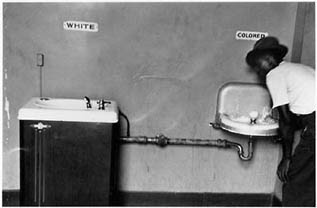 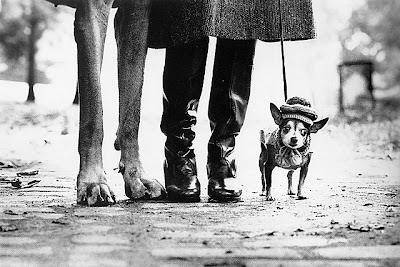