RED EYES AND BALLS THAT GLOW IN THE DARK

After AIDS, Malaria is the most infectious disease on the planet. Up to 2,700,000 lives are lost to the disease, mainly in Africa, and because we don’t get it here (but wait for Global Warming?), we, in Western Society hardly seem to see it as a problem. It seems you can’t hear the screams if you are far enough away. The news that there are real breakthroughs in the fight against it being announced by researchers therefore is good news indeed.

In America, they’ve developed a new strain of Genetically Modified mosquitoes which are more resistant to the Malaria infection. The idea is that if these are released into the wild, they could become the more dominant strain, and therefore because fewer of them then carry the disease, it will become less prevalent. But the mozzies developed by the American scientists seem to have developed, either inadvertently or vertently, eyes which glow either red or green. This apparently allows them to be more easily identified from the wild non-GM varieties. 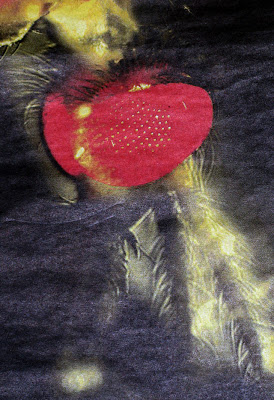 MALARIA RED EYE ("Times" today)
Coincidently, in Britain, so the story goes, a team from my old training establishment, Imperial College in London, has progressed along similar lines and developed a GM mosquito which has fluorescent testicles. This, equally apparently, allows them to be more easily identified and then sterilised. They then would get released into the wild, breed with the normal females, who then would produce fewer eggs, thereby reducing the number of insects to pass on the disease.

It would seem in pretty poor taste to see any form of humour in all this, but....
I have absolutely no idea how many mosquitoes there are in the world, but it must be up in the squillions, and the idea of selecting mozzies individually for treatment either by the colour of their eyes, or, even more bizarrely, by the glowingness of their naughty bits, seems to me to be a way of attacking the problem which I would never have considered. You’d have thought that some form of Mozzie genocide was what was required, rather than a form of insect sniper.

Ignoring the potential pitfalls in using genetically modified insects in such a dangerous area as malaria, you have to believe that anything which addresses this terrifying problem has to be a good thing. It would indeed, give the “No GM at any price” merchants a bit of a moral dilemma if, by using GM Mosquitoes, significant inroads could be made into the level of deaths from Malaria.

So Good luck to them both – anything which holds out the hope of reducing the effect of such an awful disease can only be a good thing. Let’s just hope that The Law of Unexpected Consequences never needs to be used in the future to explain something nasty away.
Tags:
malaria,
GM,
genetically modified
Posted by rogerc at 10:16 pm