THE PERSISTENCE OF MEMORY

The Floppy Disc is dead, or at least, breathing its last - so PC World and Dell seem to be telling us.

Yet another storage medium, which was announced as the saviour of the Computer world when it came onto the scene in 1971, has been found wanting in the capacity department by the ever increasing Pac-Man like storage requirements of current computer software and files.

Like most things in life, it shrank in size as it got older, starting at a very healthy 8”, reducing firstly to 5¼”, and finally in its middle age and wizened dotage, it shrivelled to 3½”. And still it couldn’t keep its customers happy, even though it got less floppy as time went on! At 1.44 Megabytes, each one could hold the very top left hand corner of one of the photographs I take. Depending on whether you’ve seen any of my pictures will determine whether you think that is a good or a bad attribute!

A couple of computer magazines I’ve just read, have reacted to this demise, and launched into something approaching a eulogy about the things. “Life will not be the same after it’s gone.” “Our lives are changed for ever …..” and so on. They then go on about how with the lifetime of storage media systems reducing continuously, we are in grave danger of being the first generation where almost nothing is left for our successors to remember us by, not because we haven’t saved it, but because there will not be any machines around in the future which can read them.

The message they are trying to evangelise is – Back up everything continuously, Copy it all, Duplicate, Store a full copy on a remote island in the event of a nuclear strike or an Npower surge, keep copying all the old stuff onto the latest, new fangled storage system as soon as you can – otherwise you face memory oblivion, and presumably cease to exist.

Well, I can understand that for the business community, for a Government department, and especially for the maintenance department of the airline I’m planning to fly on next. But I wonder if the same zeal needs to be thrown at all us recreational users.

If I look back into my own personal past, my mother remarried when I was around 10, and when my Step Father and Grandmother, who were both major parts of my life, died, I ended up being custodian of their possessions. My father was a very keen photographer, even in the 1950s, and he left a massive heap of slides. I kept these for many years, and recently decided to have a good look through them.
The simple and rather sad reality was that about 95% of the pictures were of no interest to anyone other than himself. I had no idea where the views were, I had only an occasional recognition of the people he had taken, and in most cases, these people were no longer with us. I was probably the only person in the world today to whom any of these images had any real meaning. Apart from a few where close family were involved, the rest were almost entirely alien images. It was only because my father had taken them that I had kept them for so long.

So the pictures I have retained are a very small selection of the original collection, and as I move onto the Great Archive in the Sky, the number which will have any meaning to my children and my children’s children will reduce to almost nothing. It’s a bit like the cracked Sepia photo-fade of the vibrant, colourful gang of human beings at the end of “Butch Cassidy”. You suddenly realise that the images or the amounts of data that lives on after we’ve gone is far less than the glorious melange that we all surround ourselves with while we’re alive.
I have a Floppy disc with my 1975 tax return on it, and apart from personally marvelling about the almost trivial amount of tax I paid, it has no real value even now. I suppose in some ways it’s an understandable form of technical Security blanket, which gives us all a feeling of belonging, and being part of something. But when you actually get to the nub of it, we usually have a few, only a very few, pictures, and it usually is pictures, which are the real items which should be saved for posterity - the rest are irrelevant. 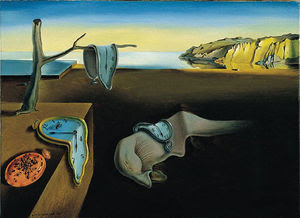 Look around your own house, and compare the number of personal images you actually have on show, to the number you’ve got saved somewhere. It will be in the ratio of Hundreds if not Thousands to One. That gives you a first pass at which ones really are important to you. So what I’m thinking is that we must, absolutely, save these special ones, and you usually find that they are saved in Hard Copy form, be it a photograph, or a painting. These are the ones which will, to a greater degree stand the test of time, and also not need the fancy “temporary” gadget in the future to read them.

I’ve not used a Floppy drive for years, I’ve got a pile of old videos, of which I REALLY only want to keep a few - So that’s what I’ll end up doing, when I can get Chris, my friendly IT Guru to teach me how to do it. I never even had an 8 Track cartridge system – they were SO “Get your trousers on, You’re nicked!” And I resisted buying a CD player for too long, because I thought I’d end up having to spend a fortune replacing my 200 LPs. Of course, when I got there, the number I actually duplicated was dramatically lower. All are indications of the same thread - we all keep too much Stuff around us.

So the real issue here is, look critically at the items of computer data where it really would be a heartbreaker if they disappeared, and make sure these are copied in many forms. And I suspect we will find that the best form is a hard Copy image, which will last for lifetimes, and, as a bonus, will also give you pleasure while you are still around to look at them.

Email ThisBlogThis!Share to TwitterShare to FacebookShare to Pinterest
Labels: back up, dali, floppy disc, memory

You're talking about a phenomenon usually dubbed "digital rot" and there's a little more to it.

Generally you are right if you consider the matter only on a small, personal scale. Does it matter in 100 years' time if no-one can see my digital happy snaps? Of course not.

But what if future historians can't see not just my digital happy snaps (or tax returns or responses to the Office of National Statistics), but those of everybody else too?

Would we be richer or poorer if we ourselves had no access to the Magna Carta or the Dead Sea Scrolls or the 1901 census?

Yes, there is a vast amount of "information" out there in the digital domain that has no intrinsic value from day one - but if we ultimately lose all of it, then any opportunity for future generations to learn from our mistakes will be lost.

I know that learning from past mistakes is currently a little démodé (qv Iraq and so on), but as a general principal it is probably a good thing and may yet come back into fashion.

And if you want help transferring those old VHS tapes to YouTube, just let me know...