“Cogito, ergo sum: Cogito, Dim Sum.” Latin for “I think therefore I am: I am what I eat.” Or something like that.

Yet another of the reports which constantly analyses us all to death tells us that the average person’s arsenal of recipes which they can cook is around five. Now assuming that, on the male side, there still remains a hard core of the “Get me dinner on the table, woman” type, who presumably do not trouble the scorers in such a review, that must mean for those interested in foody matters, the average is somewhat higher.

This is quite surprising as in my youth, in the 50s, cooking in my parent’s house was more like a refuelling operation, rather than something to nibble seductively away at one’s tastebuds. I suppose one of the major causes for this change, in addition to the explosion in foreign travel which has opened our eyes to the sight, smell and taste of cookery from other countries, has been the rise of the celebrity chef. Just after the Second World War, my mother had Mrs Beeton to guide her as well as the Good Housekeeping recipe books, but much of the cooking on which I grew up veered towards Woolton Pie* rather than Omelette Arnold Bennett.

Just around that time, Elizabeth David’s books appeared, and, over the next few decades, the trickle of cookery books gradually turned into a complete flood. TV picked up this theme, with Robert Harbin, Fanny Craddock (I seem to recall her once concluding a recipe with the phrase “Enough for one large Tart” – cheeky Bag!), The Galloping Gourmet, Keith Floyd, Delia, Nigella, Rick Stein, Jamie Oliver, Gordon Ramsay and now Heston Blumenthal have been educating us all for nearly 50 years, with television doing what it normally does and distorting almost all of them into strange “personalities”, to keep the programme ratings on the boil.

For someone who has only turned his hand to cookery over the last few years, it has been fascinating to watch this motley crew retrospectively in action on the innumerable cookery “GastroPorn” channels on television. I’m not sure how much you really learn from watching many of the showbiz antics of some of them, but it is always intriguing to put the visuals away, and look at or try what they are really there for – their recipes. If I’d tried everything they cooked, I’d be the size of a small town by now, so I’ve only had a go at a small selection of what’s on offer from them.

The strange thing is, there are some chefs you see where I hardly fancy anything they put in front of us, whereas there are others whose offerings almost always get me salivating. This applies not just to the cookery programmes, but the books that they all write as well.

Garry Rhodes, Ainsley Harriet and AWT, I simply can’t hit it off with. Heston Blumenthal seems to live in a parallel universe to the one I inhabit, and I simply don’t warm to his cookery at all. I love Rick Stein, and, like most men, have this dark hankering for Ms Lawson to come round and show me how to cook just about anything. I admire Saint Delia, and Christmas in this house has mainlined on the good lady’s recipes for many years now. I can take or leave the rest, apart for Gordon Ramsay, whose recipes in The Times, I always seem to be cutting out with an “Ooh, I fancy that!” comment.

But there’s one guy who tops the lot for me. In terms of TV, he’s probably one of the least good, but, read his cookery books, and then try his recipes, and that’s the reason I’m a total fan.

His writing is, by a country mile, the best of the lot. He writes in a language as if he’s sitting across the table, discussing a particular dish, with a glass of wine in his hand. No pretension, no bullshit, and he makes the whole thing come to life in a way no other writer does for me.

He also seems to want to cook things which almost always gets me drooling, simply by reading the words on the page. None of this “First, skin one’s Ox…” approach. He cooks things that we all like to eat, but with a twist which makes it all a bit special. A eulogy to the Chip Butty, an excellent Toad, which includes wrapping Pancetta around the herby Pork Sausages, and cooking them all in a Mustard tweaked batter, and another on how to make “a really good, and very easy white loaf”. He uses quantities like “the handful, the pinch and the slurp”, and tries to make you “feel” what you are doing in the cooking, rather than slavishly following an “accurate to a gram” listing, which takes no account of the fact that tomatoes, say, change size, texture and taste as the seasons move on.

I’ve just made his bread recipe, and taken it down to tempt my daughter, son-in-law and my grandchildren, one of whom “does not like crusts”. Well, the whole, still warm, crisply crusted loaf seems to have simply disappeared, devoured with probably far too much butter – and Crusts now seem to be the order of the day! 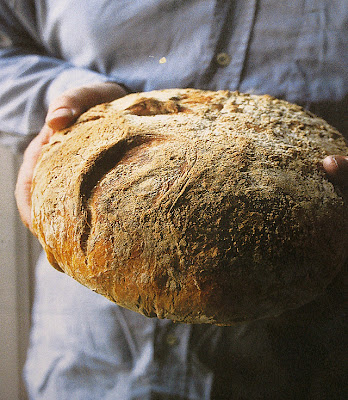 ACTUALLY, MINE LOOKED LIKE THAT, BUT IT HAD BEEN CONSUMED BEFORE I'D GOT THE CAMERA OUT, SO I PINCHED THIS PICTURE FROM ONE OF HIS BOOKS!

Well, the best laid plans etc …… That’s buggered tomorrow’s breakfast for me, but there you go. But, if that’s not what home cooking is about, I’m missing the point. Double quantities next time.

Try his home made pizza, with a layer of Garlic butter, pound coin-thick slices of al-dente cooked Cold Charlotte potatoes, a good layer of fresh thyme leaves, half a dozen slices of Italian Pancetta Ham, topped of with a few handfuls of Taleggio Cheese, and baked in a hot oven for about 10 minutes. I’ve never tasted a better pizza. Simple, distinctive, and great to eat.

What more can you want from a cookery book?

Pick any of the books he has written – “Appetite”, “Real Food”, “The 30 Minute Cook”, and “The Kitchen Diaries” – and you will not be disappointed.

If I had to live with one person’s cook books for the rest of my life, without doubt it would be Nigel Slater’s.