THE TWISTS AND TURNS OF KENNEDY'S DEATH

The “Who killed JFK?” question has intrigued me, as the whole mechanism of Government in the Western World is increasingly seen as less than “lily-white”, when someone occasionally lifts the edge of the political carpet. The whole thing always seems to take on the feel of a John Le Carre spy novel, in that you simply do not know whom to trust, and who, if anyone, is the good guy in it all.

I wrote a couple of pieces a while ago in February, which picked up the issue of Watergate, Howard Hunt, one of the organisers of the botched raid which started off the whole Nixon resignation issue, and his wife, Dorothy, who herself died in “interesting” circumstances, where an open verdict is probably the best summary of the current “state of play”.

Hunt died earlier this year, and in the piece on him, I noted that “Howard Hunt’s autobiography is, apparently, just about to be published …….” with no real knowledge of what that really meant – I had a thought that he would use this book to get back at people from beyond the grave.

Now, if you delve into a recent Rolling Stone Magazine, and also last week’s Sunday Times, just look what you find. Howard Hunt’s son Saint, a self confessed, but apparently reformed, drug addict, telling a fascinating story about how his father apparently, shortly before his death, sat him down and spilt the beans about what he knew about Kennedy’s death.

There have been persistent rumours for ages that Hunt, who disliked Kennedy intensely, was in Dallas on the day Kennedy was shot. There is a picture, taken on November 22nd 1963, the day when Kennedy was shot, of three tramps walking in a line in Dealey Plaza, Dallas. 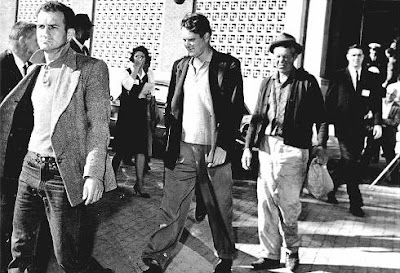 THREE TRAMPS, OR NOT?

Hunt’s son, Saint, says about one of the tramps (the third in line) in the picture “I’ve got a gut feeling it’s him”. Controversy has never died down about these pictures. The leading tramp is said to be Frank Sturgis, who just happened to be one of the men arrested in the Watergate building, setting the whole Nixon unravelling off. As one might expect, the Government denies this, but there is no conclusive evidence that proves where either Sturgis or Hunt were on that day.

He recalls that his mother told him Hunt was on a business trip to Dallas on the fateful day, and that some while after, he was woken by his father, who made him get out of bed one evening and help dispose of a suitcase of microphones, cameras and other equipment into the local River after cleaning any fingerprints off them. The following day, he goes on, he went with his father to a safe deposit, where Hunt “shoved about $100,000 cash down the back of his pants”. To this day, he says he does not know why these events occurred.

He goes on to record how, six months before he died, Howard Hunt, with only his son in the room, “began to write down the names of the men who participated in a plot to kill the president”. Saint claims he has the notes Hunt wrote, and says “It has all this stuff in it, the chain of command, names, people, places, dates. He wrote it out to me directly, in his own handwriting, starting with the initials ‘LBJ’ ”.

Saint Hunt, if you examine him as a character witness would seem to come up a bit short of the mark. After two drug convictions, and a very unusual life to date, he has apparently got his life together, but the relationship he had with his father was not a normal, typical Father/Son one. You have to wonder if this is all made up, with, perhaps, an eye on the main chance. The two people were not close for most of their lives, and Hunt Senior, seemed to think that his son was a waste. So why would he entrust such a dangerous set of information to someone, albeit his son, who he did not seem to respect.

The answer, of course, is that we shall probably never know. Almost all of the individuals involved are now dead, so corroboration is next to impossible. Hunt’s son may, or may not, be telling the truth.
But, for those of us whose trust in the integrity of Our Political Leaders is less than absolute, it gives another, rather delicious, twist to a story that, to my way of thinking, will live for ever.

If you want to follow this further, dial into "Rolling Stone" Website, and follow through Politics to 18th March in their Archives.
The writer of the article which sparked this off was Eric Hedegaard.