Reading about the lives of other people is a passion of mine. This can take several forms - the Biography, where someone takes an outside view of a person’s life, ranging from a congenial to a nasty viewpoint, or the Autobiography where the individual writes (or is accorded the title of having written) his or her own life story.

Both of these have their plusses and minuses. The autobiography will contain information and opinion known only to the author. The potential price to be paid is objectivity. It takes a particular type of individual to avoid leaving out, or at least colouring in his/her favour, any event which does not do them justice, or about which they are not totally proud. The Autobiography is also usually written long after the event, often towards the end of the person’s life, and thus the power and possible distortion of hindsight can often loom large (knowingly or unknowingly) in the author’s mind, and hence on the page.

We all use “post event rationalisation” to so much of our lives that often the context and meaning of a particular event ends up completely different years and even decades later. We also view the myriad people with whom we come into contact in a general, summary form at the end, rather than the reality where there are times when we love them, and other times when we may feel very differently about them. The Autobiography usually smoothes these ups and downs out, and loses these important and often interesting fluctuations in the final text.

The Biography however, can include these issues with impunity, but only if they are known by the writer. Timing of these books is key – write them too early, and the stories are not finished, and write them too late, and all the people needed to corroborate and act as a “check and balance” in the search for truth or at least balance, are dead.

It is so difficult with both forms of writing to get the colour, the immediacy, the feeling “on the day” about the subject’s real thoughts and motives, attitudes and intentions. However, for the people whose lives are worthy of such treatment (and there aren’t that many), the medium where this can all become so much clearer is The Diary.

As a written form, The Diary is the most exciting, immediate and informative way of living someone else’s life. It takes a very special individual to keep up the task of Diary keeping, particularly when events playing around them are testing them mentally and physically to their limits. So we end up with all too few examples where interesting people create such a fascinating view of what’s going on. We must be grateful therefore to the few who do manage it.

I have read most of the “Premier Division” diaries, particularly the political ones of the last Century, and they have probably give me more combined pleasure that any other form of book. In the field of politics, the Diaries of Harold Nicholson, “Chips” Channon, Duff Cooper, Harold Macmillan, Richard Crossman, Tony Benn, Edwina Currie, Gyles Brandreth, Woodrow Wyatt, Paddy Ashdown, Piers Morgan (believe it or not, Yes!) have all given me great pleasure, but my personal favourite, winning “easily”, to take up a racing metaphor, out of all of these “contestants” is the late, lamented Alan Clark MP.

Three volumes of his diaries have been published, covering the period from his beginning in politics in 1972, up to his too, too early death in 1999. They are a truly amazing read. They exude the “stuff” of politics, day by day showing the twists and turns of an ambitious, clever, exciting man who wanted power, and achieved partial success, but was left frustratingly unsatisfied at the end. A man whose views and attitudes on life were not to everyone’s taste – his declared penchant for Naziism and his often declared adoration of Hitler, galloping snobbery, a hugely low boredom threshold and tolerance of what he saw as mediocrity, his ever present eye for the ladies which must have driven his wife to reach for the meat cleaver on many occasions, and so on. 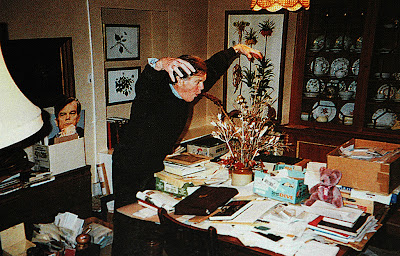 ALAN CLARK, FACING HIS DESK AND THE PROSPECT OF A DAY'S FILING. A FEW SECONDS LATER, THE DESK WAS CLEAR

But, and it’s a bloody big But, you cannot fail to wish you’d met him and been part of his entourage, or a friend. He was a hugely exciting and interesting man. He wrote with great skill, being a considerable Military Historian. He knew an awful lot – his father was Kenneth Clark, the Art Historian, and creator of “Civilisation”. He lived in a fantastic Norman castle in Kent which looked just as you’d imagine Ernst Blofeld’s English hideaway would be.

He was searingly, cringingly honest, even when being so left him at the mercy of the reader’s views. He conducted, in full view of the reader (and presumably, his wife!), a long affair with the wife, and two daughters, of a judge, and this thread runs unsuppressed in the book through the 14 years of its tangled life. You read about his lifelong passion for old, very high quality Motor cars, his addiction to Backgammon, his unnervingly kinky feelings for Margaret Thatcher, his hatred of the Plymouth Constituency for which he was MP, his huge love of his children, his frequent vertiginous financial state, his often all-consuming hypochondria, and his complex and totally individual views on most things in life (almost National Front Right Wing politics vs vegetarian, Animal Welfare Vigilante).

His use of language and the structure of his writing is excellent, often leaving you with an incredulous last word or sentence which you would reread and savour again and again.

As an example, talking after the Falklands war, when his own Nationalist views came out with all guns blazing, he got into discussion with some of the Political Wets, about making sure the Argentine Prisoners were properly fed on the recaptured islands – his parting shot diarising the discussion was “There was some long and disparate conversation about what the Argentine prisoners were going to eat. I suggested that they should eat each other.”

His view on Sir Robert Armstrong, then Secretary to the Cabinet, and probably the most important Civil Service Job in the Country, when the subject came up in an MP group discussion – “….Carol Mather chimed in with support, and said he too thought Armstrong was ‘creepy’.

‘It is my personal belief,’ I said, ‘that he is a full Colonel in the KGB.’

If I was to choose Half a dozen people from History to populate an imaginary eclectic Dinner Party Table, he would be among the very first ones, if not the first, I would choose.

His Military books, which include a terrific denunciation of the Army Generals’ (mis-) management of the First World War (later turned into the hit musical “Oh, What a lovely War”), a comprehensive history of the Tory party, and an excellent book called 'Barbarossa' about the disastrous German attack on Russia in the Second World War, are something to be proud of. But he will live for a long time off the back of the Diaries – they are something apart, and should be greatly cherished.

Coincidentally, I started to reread them a week or so ago, just when Alistair Campbell’s Diaries were released. So, immediately the possibility of comparisons came to mind. Now I think Campbell is one of the most extraordinary men of the last political decade, and am sometimes inclined to share Rory Bremner’s view that for much of the time Campbell was the man running the country. So one can’t help look forward with huge anticipation to the idea of such a man keeping a detailed diary of the times, and publishing it.

But (another bloody big But), one’s eagerness is clouded by the thought that Campbell has had the final say on what is included, with a declared intent to avoid rocking Tony Blair’s boat. Diaries don’t work like this – they need to be ruthless, honest and extremely "unselective" on the part of the writer. The reason we want to read them is to find out exactly what he thought of Blair, not to have this skirted over. If he's not brave enough to allow this to happen, he should wait before publishing them. 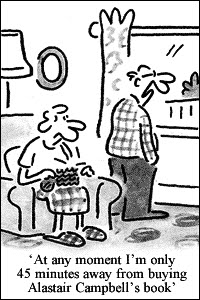 ANOTHER OF 'MATT'S' HUGELY PIN SHARP CARTOONS - IS THERE A BETTER CARTOONIST IN THIS COUNTRY?

Usually, a forthright, independent editor is a must – one who can stand up to the writer and say “Bollocks, I think that bit should be in, and I’m sorry if it embarrasses you, but my Word goes here.” The depressing thought here is that they have been published way too soon, and too much excising of the bits that make most diaries actually worth reading will have taken place. We shall see.

I will refrain absolutely, at the moment, from commenting further on this because, as I write, I haven’t yet read them – I’ve read a few reviews, and the forecast from these isn’t good. But the only way to reach a conclusion is very simple – read the Book.

So, today’s trip to Waterstones saw me returning with The Tome, secured at the rather odd discount of £5.01 (Don’t ask, the girl on the till didn’t understand either), and I’ve got my literary cossie on and am just about to dive into the 757 page long pool.

I may be some time.