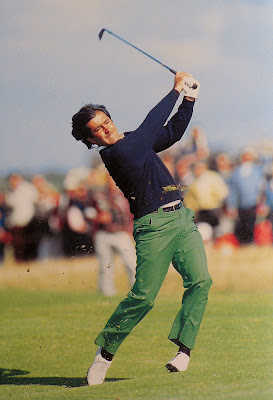 Severiano Ballesteros, thankfully from my viewpoint, announced his retirement from competitive Golf today, 30 years after he exploded onto the scene. Having watched most of the Greats from around 1960 onwards, there is no doubt in my mind he is the most exciting player I have ever seen. It has been a thread of real sorrow to watch him struggling and slipping down the rankings over the last ten years from the stratospheric heights he reached in the 80s.

A hugely emotional man, he wore his heart firmly on his sleeve which endeared him to so many fans, but no doubt on occasions may well have cost him tournaments, even Majors. But that mercurial nature, and brilliant smile were things that made you look out especially for him.

He was not a huge man, and therefore had to put his whole being into his wood and long iron shots, which he did with utter abandon and fearlessness. This often got him into untold trouble, and sometimes left him in parts of the golf course no-one could recall being visited before – car parks and the like.

But he had a miraculous short game – Gary Player, writing in today’s Telegraph says “… nobody was ever better than Seve when it came to the short game”. His feel for this crucial part of the game often verged on magical, and it often left his opponents fatally crestfallen when he recovered and beat them from a position where they thought he was “dead”.

My own recollection of him was watching, from a very honoured position at Royal Lytham in 1988, when he put together a remarkable last round of 65 to beat Nick Price. A colleague of mine had got hold of a Pass into the Clubhouse, and to be within feet of the great man, at a time when he was making sporting history, was an immense privilege. I have to admit I didn’t dare say a word to him at the time, fearing that breaking his concentration might lead to a short iron winging its way in my direction across the locker room to make his point. So, I just did a sort of intelligent Gorp at him, but even so, I’ll remember it for a long time. Heros, in the flesh, at 5 paces don’t happen too often.

He ran into back problems, and other issues, and really lost his game in the mid 90s, but only after winning 5 Majors, and over 60 European and US Tour Victories. In some ways however, astounding as these figures are, it was the way he did it all that made him stand out. Just read the praise from his fellow professionals. These guys are not much given to praising their peers, it’s not good for their egos, but, to a man, they all think he was at the very top of the tree.

His swashbuckling style, his blinding skills, his push into America, his startling form in the Ryder Cup – 20 points out of 37 matches – showing just how formidable an opponent he was head to head (he also won the World Match Play Championship 5 times), his fanatical desire to host the Ryder Cup in Spain, which he did, captaining and leading the team to a very emotional victory at Valderrama in 1997, all combine to make him utterly charismatic on the Golf course, and the sort of golfer many of today’s stars took as their role models.

All of which makes his gradual decline so sad to watch. I am sure I’m not alone in wishing he’d given up a while back. But, there you go.

If you never saw him in full flow in the 80s, you’ve missed something unique and thrilling. The glorious picture at the top, taken by David Cannon, says it all.