A NEW APPROACH TO SEPIA TONING

Inadvertently last night, I set in motion a piece of Engineering Testing of significant practical importance, namely the resistance of Digital Camera Memory Cards to a hostile environment way beyond the tolerances stated on their Specification Sheets.

Doodling away in my Studio, I made a large Espresso and settled down to do some work. I was organising my camera for the following day, and changed the Memory card for one which had a lot of spare capacity on it. A few minutes later, I went to put the old Memory Card away in one of those dinky little cases they come in, and it was nowhere to be found.

I hunted high and low for a few minutes, and simply couldn't find it. Since I hadn't moved from the seat in front of the computer, I failed to understand how I couldn't lay my hand on it, so, losing reason and logic, concluded that the outer limits of the Bermuda Triangle must now have reached Western Shropshire, and gave up.

As I drained the cup of coffee, you probably don’t need to be that clever to realise what was lying in the bottom of the cup. 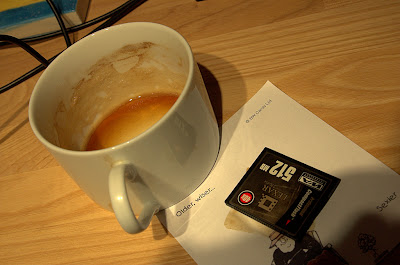 As the most fundamental law of the Universe would have it, I was just about to transfer a few images I had taken that day onto the computer, so the card was the only place in the entire known universe where these pictures existed.

It had been there in 80-90 degrees for about 10 minutes, and looked very much the worse for wear. So, we’re now trying an experiment. It’s drying out, and tonight we’ll see, using a sample batch size of one, if these things have any degree of thermal resilience in them.

I will report back.

photography,
memory cards,
coffee,
humour
Posted by rogerc at 12:47 am

hey! i'm going to cali this weekend and won't be back until september...here is the website i was talking about where i made extra summer cash. Later! the website is here