DID ENGLAND'S SLOW OVER RATE LOSE THE MATCH?

What a good Test match it’s been. And how heartening to see a relatively new set of England bowlers coming together in such a great way. Sidebottom, Tremlett, Anderson and Panesar is not a list you’d expect to see playing a top class line up like India, and it’s only like that because of major bowling injuries for Harmison, Hoggart and Flintoff. 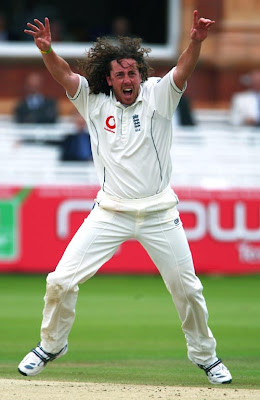 But, to a man, they all played terrific cricket, were not fazed by it all, and did a first class job all round. It will make the “first pick” bowlers sleep a little uneasily to watch, particularly if they can repeat the performance in the second Test which starts on Friday with an unchanged side.

England so nearly made it, but it’s worth some statistician poring over England’s over rate today. I got the distinct feeling all during the day that, with a little more captainly foresight, knowing the Weather forecast as he would have done, that they could have bowled a few more overs than they did. And who knows what that might have resulted in.

It’s easy to be critical, sitting watching a TV set, but the low over rate of modern test Cricket is one thing that does continually niggle. Usually, it ends up not mattering much, but today, I was left with a real feeling that the result of the match could have been decisively affected by this one issue.

Apart from that, from England’s point of view, it was a pretty good game, especially by their bowlers. Off now to Trent Bridge.