There are three Rock bands in the World I would pay any money to see, and one of them, Genesis, did the honours in Manchester last night. Along with around 70,000 other fans, the pre-1996 version of the Band - Phil Collins, Tony Banks and Mike Rutherford, with Daryl Stuermer and Chester Thompson in support, kept us all enthralled for an uninterrupted 2½ hours on a lovely rainless night at Old Trafford. 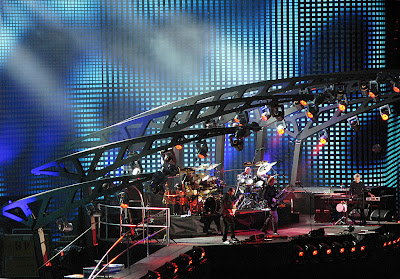 40 years on from their founding, they have a tremendous following among the oldies whose Early Onset Alzheimer’s has not yet clouded their memory of what Progressive rock was about. They have always been in the absolute forefront in putting on a unique stageshow, and last night’s set was no exception. Incorporating 9 million LCD lights (no, I didn’t count them) it looked like a huge 20 metre high seashell where videos, cartoons, live audience pictures and anything else the set designer wanted was projected, as well as fireworks at the end. 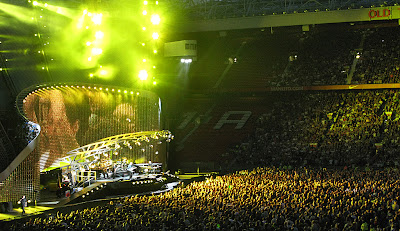 The band, since Peter Gabriel's departure, can not be accused of pushing themselves forward sartorially, and last night, they were strangely underlit, as well as wearing sombre, dark clothing. Phil Collins seemed to have been taken over by the Ron Dennis meets BladeRunner meets Wacky trainee Funeral Director look in his choice of a short close fitting Black Designer Bin Liner jacket. Anyway, it all made you concentrate on the set, which was modern, different, and dazzlingly effective. 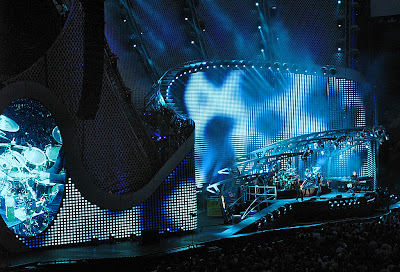 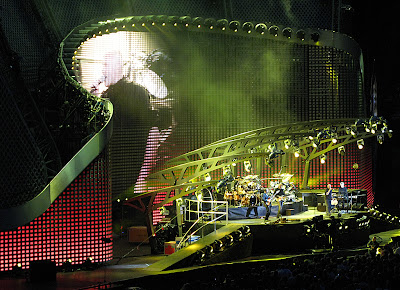 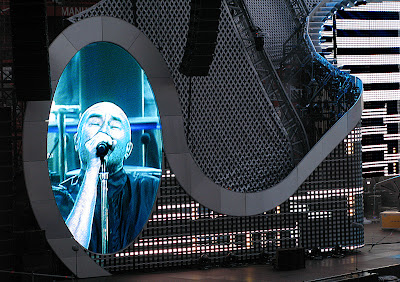 Until they started playing. And this is something they do in a stadium setting supremely well. Having not released any real new material since We Can’t Dance in 1991, the whole set was well suited to the Old Groaners who made up the audience. Phil Collins’s introduction set the tone – “Any Old People out there, besides Us?”.

Off they went with excerpts ranging from the early Seventies, through the Eighties, and a couple of short songs off their last Album. Hardly anything was announced – you were supposed to know what they were. And the number of people in the adoring audience who were word perfect through all the songs showed that they were right.

This author’s favourite piece of theirs “In the Cage”, a 10 minute long epic with a typical raft of key changes, tempo moves, time signatures, and emotional ups and downs was played to perfection. I challenge anyone not to resist a long “Wow” as Collins completes the plaintive and moving “Afterglow” ending. Sheer Magic, and, outside the family and friends, the best 10 minutes of my 2007 to date.

As an already confirmed believer, there was never going to be any real contest in my mind about the music. I saw them on their two most recent tours firstly in 1988, standing on Wembley’s hallowed turf, and then sitting on a grassy knoll (no gun) in Roundhay Park in Leeds in 1993, and each time, they put on a totally memorable show. The only slight thought before last night was whether 14 years on, and several personnel changes, they could still get it together with the original (well, 1975 anyway) members . They were clearly older, with Mike Rutherfood looking quite gaunt and strangely reticent, and Tony Banks, usually sitting at his keyboards totally oblivious to the audience, actually seen to sing along with some of the songs. 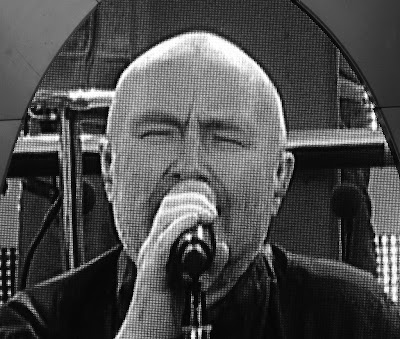 But Phil Collins led them all in putting on a bravura performance. Quite why critics look down rather disparagingly on his career is a bit of a mystery to me. It takes something very special to hold an audience of 70,000 people in his hand, and that’s what he did last night. 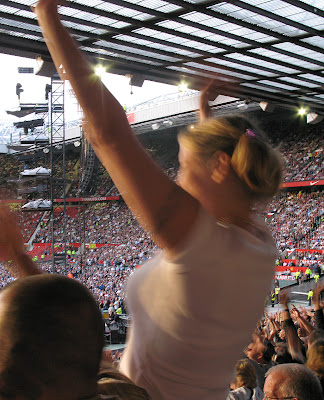 Their songs are quirky, ranging from Audience Participation meets SATS Year 9 Testing in a song about the “Domino Principle”, to a creepy crawly fantasy about the other things that live in your house besides People. But that’s what makes them different. Only they could produce lyrics like they do. They are accused of being pretentious, but for a group that sold out 150,000 tickets for their two UK shows in less than 90 minutes, that’s an awful lot of people who do not agree. Anyway, what do the critics know? 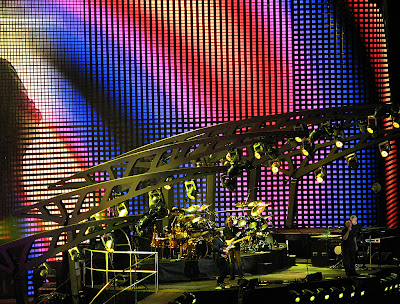 So, a great, great night.