MUCH TOO GOOD FOR FISH AND CHIPS - No. 1 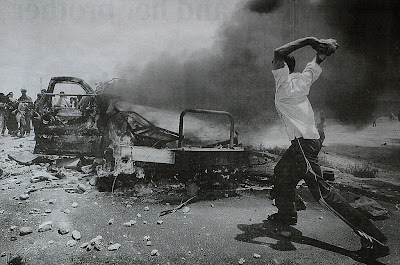 Double click on the image to see a larger version
The world today suffers, or enjoys, depending on your viewpoint, from an utter surfeit of images. They are everywhere – on television, in books, magazines, films, hoardings, newspaper, and here I am adding to them even more over the Internet.

They all compete, in this unstoppable torrent, for your attention, and, as a result, most simply appear before you, get a cursory glance, and are then committed to oblivion. A good example of More is Less.

This is particularly true in the Newspapers. By definition, the newspaper is a transient thing. The date on it is today, and tomorrow, it’s gone. But, within its pages, you find the occasional picture which stops you in your tracks, or at least stops me in my tracks. So, rather than toss these on the pile to be taken to the tip, I’ve started to keep the ones which strike me as exceptional, and keep a record of them.

This is No. 1 in a series which you will see I’ve called “MUCH TOO GOOD FOR FISH AND CHIPS”. For any foreign reader who may think I have just lost my marbles, old newspapers in the UK used to be collected and used to hold Fish and Chips, the staple British Meal, until Chicken Tikka Marsala took over a few years ago. Actually, I think the Health and Safety Faschisti who blight so much of our lives today, have probably banned even this little avenue of pleasure, probably due to their belief in the possibility of the nation being wiped out by catching some form of life threatening disease from the printing inks in the newsprint which might conceivably come into contact with your piece of Cod.

Anyway, this picture appeared in "The Times" a couple of days ago. It shows what is becoming a frighteningly common image these days of an Iraqi boy throwing a rock at a burning Allied Security vehicle. Now, the truth is we really don’t know who did what to whom in the run up to the picture, and we are asked as always to read the story as presented, and assume it’s accurate. In this situation, I simply don’t know, but that’s not the point here.

I’m looking at the photograph, as a photograph, and I think it’s a terrific image.
Just look at it.
The composition is hugely powerful. The boy fills the frame, and your eye is led through the image, past the burning vehicle to a band of bystanders who are watching the goings on. They are cut off by the left side of the image, and you are left wondering how many are actually there. The whole flow of the picture from bottom right. diagonally upwards to the top left hand corner of the image gives great strength to the image. The background, of swirling smoke, acts as a very pictorial background to the shot. It masks a lot of unnecessary detail, and makes your eyes concentrate on the main action of the photograph.

The road alongside and in front of the burning vehicle is littered with rocks, which photographically adds ominous detail to what otherwise would have been an uninteresting bit of the photo, and yet around the boy, there are none to interfere with that part of the image - you're just left with the boy to look at here in this part of the image, with nothing to compete for your attention.

Even the colour and tone of the smoke adds to the image’s power. It’s darkest on the right hand side, and gradually fades to almost nothing on the far left hand side. The boy’s pale coloured shirt is perfectly caught against the dark part of the smokescreen, giving a very dramatic backdrop to the most important part of the shot – the boy himself.

And just look at him. The photographer has caught him at just the right moment. Look at the shape of his body and the power he is bringing to the act of throwing the rock – the line through his left leg, up through his body and onto his arms – Talk about Rage against the Machine. It’s all here in one glorious image.

You can get a bit philosophical about the whole picture. Normally, in the Western World, largely because we write and read, from left to right, in your mind, pictures have an inate comfort if they also “read” from left to right.

Here the picture reads the opposite way round. This is most definitely a right to left picture. But just think how the Arab world writes - Right to Left. So just perhaps, there is a metaphor underlying the image – this image is for the Arabs, not the Western World. It may just have been that way round on the day, but it does get your mind chewing it over.

And the photographer – we are not told. The caption on the image in The Times simply says “Reuters”, which I’m sure is true, but I must say the man (I assume it’s a man) who took this one deserves a bit of credit. It appeared on Page 7, but, in defence of the Picture Editor, he did spread it across the whole page of the paper, so I suspect he thought he got a good one there.

Anyway, it’s a great photograph, and one which deserves to be kept a long, long way away from a Large Haddock and Chips!

iraq,
photography,
the times,
Posted by rogerc at 5:36 pm

Email ThisBlogThis!Share to TwitterShare to FacebookShare to Pinterest
Labels: iraq, photography, the times