One of the real pleasures in our lives is to own two dogs, both Flat Coated Retrievers, named Poppy (Senior Dog), and Millie (Junior Dog). Of course, it isn’t as simple as that – of the two, Junior Dog is in reality the Alpha Dog, and jumps all over Senior Dog, who, in truth, is quite happy to be jumped over.

All of which means that one of life’s requirements becomes a Vet, and here, I must say we have fallen, absolutely squarely, on our feet. She practices (a very strange word, that, because there is not the slightest element of practice involved) in a rural part of Shropshire, and is quite simply one of the most impressive Professional people it has ever been my pleasure to know. She is clever, interested in the animals to a degree I have never experienced before, has the openest mind I have ever come across in a medical person, and, when the chips are down, which, with animals, happens far too frequently, she exudes an attitude and a sense of comforting which is, in my experience, unique.

If there was a “Vet of the Year” competition, anyone finishing above her, would have to be a quite exceptional person.

All of which leads me onto her Wisteria. Her practice is located in a set of rural farm buildings which surround a large courtyard. On the East facing wall of this courtyard, is a Wisteria. I visited it today, to see the plant in bloom, and to take some pictures of it. Now, I’m not an expert, by any stretch of anyone’s imagination, but this Wisteria is HUGE.

Richard, the husband of our vet, told me that they had needed to cut it back recently, because one side of it was creeping its way onto the house, and they did not want that. This morning, I measured it, in its cropped state, to be 34 yards ((102 feet) from “Wingtip” to “Wingtip”.

The beast, for that is what it is, was planted in 1975, so has been growing for 32 years. The pictures I took, which include the 6 foot high Richard, as a Human Scale, show it stretching almost the whole side of the barns making up the farm’s East face. Standing in front of its roots, you get a real sense of scale which, to me, is remarkable.

Just feast your eyes on these –

THE WISTERIA IN ALL ITS GLORY 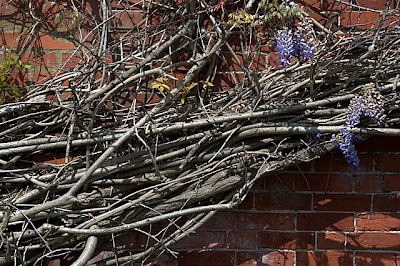 A CLOSE UP OF THE BEAST! 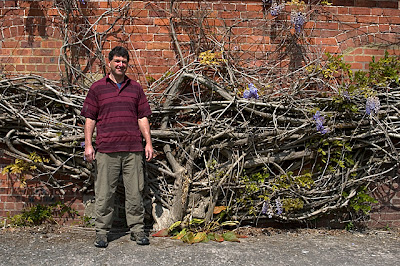 RICHARD STANDING IN FRONT OF THE ROOTS 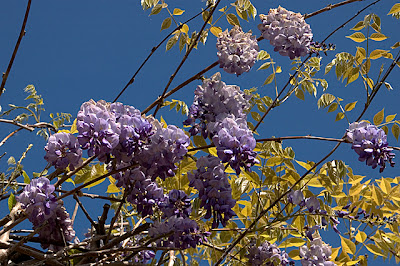 A CLOSE UP VIEW OF THE FLOWERS