A rather bizarre little vignette played itself out this morning.

Just outside where I work, in the suburbs of Birmingham, the road is straight with a pedestrian pathway on each side. Normally, the cars tear along the road at speeds which bear no resemblance to the 30mph Speed limit.
Today was different. Around lunchtime, I was greeted, on the opposite pavement, by the sight of two disabled carriages, charging along the road, at what seemed to me to be a highly inappropriate speed. They were the sort which seem to be about a foot wide, and six feet high, with the plastic side covers which act as combined sails and water collectors, depositing their catch on the luckless internees. The sort of vehicle where you wondered how they ever kept upright, going at sane speeds, let alone what we were witnessing here. 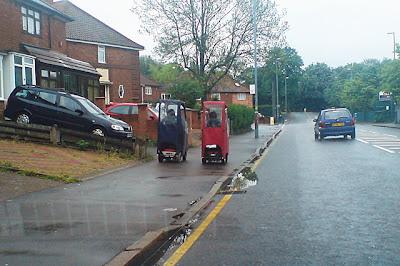 BLASTING DOWN THE MAIN STRAIGHT TOWARDS THE CHICANE
It was very much a double take, and the drivers turned out to be a couple of quite mature ladies, wearing what for all the world could have been Fireproof Macs. You could certainly describe them both, to use Billy Connolly’s very descriptive phrase, as “No Stranger to a Fish Supper”. They really did look as if both should have known better.

There was no doubt in my mind – they were racing. A few other guys from work were also standing outside watching this Pythonesque snippet, one of whom decided that an encouraging “Go on, My Son” was warranted.

The fun started when they came up to a lamp-post, which was mounted in one of the slabs on the pavement. We saw a very Grand Prix style of Late Braking, Take the Racing Line and carve the loser up to get through the gap at minimum loss of speed. The loser, clearly with a slight but real Power to Weight Ratio benefit (actually, I suspect it was all to do with the weight rather than the power!), managed to pull alongside, and stayed there until 50 or so yards further on, when the next Lamp-Post chicane came into play. We were then treated to the same Schumacher-like driving style, and a very unladylike scrabble for leadership through the gap, seemed to overcome them again. They came to a left hand side-road, and blasted, or so it seemed, around the corner, and disappeared.
Most entertaining.